Dil Chahta Hai: The not-sad movie that made me cry twice The first time I watched Dil Chahta Hai, I — like most people who watch it — fell in love. (So much so that it was the first time I saw Saif Ali Khan in a film and didn’t hate him.) It was a mix of three well-done love stories and also about life in a way that was neither too serious nor too comedic.

Some time later, grappling with the fear of an impending college graduation, I decided it was an appropriate time to watch it again.

Somewhere about 30 minutes in, I shut it off through a haze of tears.

A few months later, then freshly graduated, I tried again, but with the same result in shorter time.

I’ve told this story a handful of times now because DCH inevitably comes up when talking with friends — especially male ones — about Indian movies. When I try to explain why Dil Chahta Hai, which is easygoing and hardly a sad film, made me cry, no one has seemed to understand, even myself.

The best way I’ve been able to put it was that as someone approaching that unstable, uncertain era of life after college, the film felt all too real.

“It’s not really about that,” I’ve been told when I say it’s because I was in that particular post-college stage of life. And, in a way, it isn’t; the underlying messages of love, friendship and life in Dil Chahta Hai is the same as the message in the other Akhtar sibling’s Zindagi Na Milegi Dobara, which is set later in life.

But at the same time, it is about that. And at that time in my life, I saw Dil Chahta Hai not just as a romantic trifecta and a friendship film but more so as a true coming of age film. I saw in it not just a story and a film, but a glimpse of the uncertainty and change associated with that period of life that I faced. And it affected me then in a much deeper way than it had earlier on.

To give you some idea, I quoted one of Sid’s lines (translated into English, of course) in my farewell column from college.

That was itself an adaptation of a blog post I wrote about how 3 Idiots, Dil Chahta Hai and Zindagi Na Milegi Dobara resonated with my fear of life’s uncertainty after college. It may seem strange, three male trio buddy movies from India resonating with a female grad in the U.S.

But to help you understand, here’s an excerpt of what I wrote then:

From the time I was a high school freshman, I had my college career planned to a T. And I've executed that plan. The time spent executing that plan was supposed to be the time where I made my next plan — a plan for the rest of my life. It didn't happen. I hit this last semester and only then realized I had no real plans for life after graduation. The things I had wanted not so long ago — like a master's in creative writing — were things I didn't want anymore.

And that's where another Bollywood film enters: "Dil Chahta Hai" [The Heart Wants].

"Dil Chahta Hai" is a film now 10 years old, and I was only 10 (and nowhere near Bollywood) when it came out. But the essence that the film captures is where I find myself now.

That's the story of "Dil Chahta Hai": Three men graduate college and realize that they have no plans for life or what they want from it. Akash knows, as he tells his dad, that "there's more to life than signing checks," but he doesn't know what that "more" is. And until his parents force him into a job, he has no idea how he's going to support himself. Sameer flits from girl to girl but has no idea how to make a commitment. Sid knows that he wants to paint but has to cope with unexpectedly falling in love with a woman much his senior with a questionable past.

And Sid expresses (another) complication with figuring out life after graduation: "We'll soon set sail for our destinations. Our destinations might not coincide." We're friends for life, he says, but we don't know where life will take us.

That's what I've found to be the truth of college. You make friends with those around you because in the short term, your lives all have the same goal: graduation. But the world is bigger than college, and life after graduation means confronting the fact that anyone could, and will, go anywhere and everywhere. "Who cares where we'll end up?" asks Akash.


That image of starting a life in the real world without a single friend nearby — our destinations didn’t coincide — to lean on scared the hell out of me at the time. And it turned out to be a very valid fear as I spent so much time lonely, missing much about college and wondering whether I was in the right place and whether it was all worth it. (Not, by the way, that those feelings have completely left me; they linger, though they are less overwhelming now.) 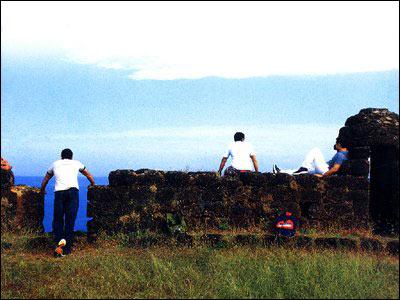 Even though yes, I did know that Sid was only speaking of it in the abstract since the trio in DCH does hold together, part of me, ever the pessimist, didn’t see that happy ending of friendship for myself. I saw only the loneliness that was guaranteed in the interim.

Now, I’m fast coming up on the two-year anniversary of graduation, but I had still avoided DCH until this weekend when it became the popular choice at a movie night at my house. I wasn’t without fear when I pressed play. Crying at a movie is bad enough alone (and I’m surprised that I ever fessed up to it considering how much I hate crying); doing it in a group is unbearable.

This time, thankfully, there were no waterworks. Maybe — probably, even — I was a bit mellowed by alcohol. And time, too.

We didn’t make it to intermission at movie night, and it was with slightly more trepidation that I later resumed the rest sober and solo, wondering if the group’s presence is what kept my tears in check. But even solo, still no waterworks.

But that line from Sid still gave me pause. And I thought to myself that in that typical way of movies, Dil Chahta Hai is happier than real life because it’s about three friends who fight, go their separate ways and then reconcile. Everyone's loneliness is resolved. My mind flitted across reality: the friends who have gone from more than entered my life in the past two years, setting sail for destinations far and wide. It’s sad when you stop to think about some of the things that growing up costs, like realizing that you have less and less in common with some people as time goes on. That unlike the DCH trio, you do grow out of a lot of friendships.

And Akash’s parents preparing to ship their son off to Australia — where he knows no one — for a job still causes a bit of tightening in my chest. I’m certainly not some spoiled rich brat like Akash that parents have to force to work (I’ve worked my ass off since age 15), but after college I did go off for a job to an unfamiliar city where I knew almost no one, embracing that fact with much less gusto than Akash. There has been no familiar Shalini to encounter en route and ease the transition (or to fall in love with, but that’s a pain for another day).

There is also still a pang in my chest watching Akash push back against his parents about jobs because two years after embarking on a career, I still fight battles with mine about jobs and the fact that there’s more to it than signing checks.

But perhaps in the past two years I have grown hardened enough to the coming of age pains in Dil Chahta Hai being in my own life that I’m no longer inclined to cry.

And watching it again, I understand why no one seems to understand why DCH ever caused me to cry in the first place. So many people see that era of life after college as freedom — the ability to go and party it up on Goa’s beaches. To fall in love. To go and paint.

For me, it never was that. I graduated college with a job offer (my one measure of stability) and, ever responsible, a need to pay down debt. And on top of that, it wasn’t full of freedom. It was full of uncertainty: the fear of a new place (“who cares where we’ll end up” isn’t feasible when you carry such a hefty idea of home) and a rapidly changing way of life, a desperate overachiever with no more benchmarks to measure herself against, with nothing left to achieve.

In simplest terms, graduating college and being thrust into uncertainty was an incredibly painful thing for me, a person who loves nothing more than security and familiarity (for an idea of how really bad I am, you should read my post about my 5-year-old sunglasses and 10-year-old flip-flops).

Weighed down by responsibility and desperately feeling the sting of being friendless in a new place, I probably missed college more than most and felt all too acutely what others — like Akash, Sameer and Sid — had that I didn’t. Friendship, love, confidence, optimism. What shifts and uncertainties they talked about in the abstract I felt as real. (Though conversely, I didn’t have their problem of falling madly in love with someone who didn’t love me back, which they each do to varying degrees.)

Still, watching now, it is hard to believe I let myself be that affected, that I hid from rewatching it for nearly two years for a film that admittedly isn’t exactly about what I was feeling. And, as I said, I understand why no one else understands. They (understandably) didn’t see in Dil Chahta Hai what I saw.