Vivah (2006): I never expected something so bland from the land of spices 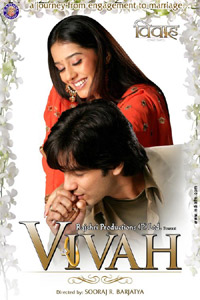 Poonam (Amrita Rao), a middle class girl from Madhupur, and Prem (Shahid Kapoor), youngest son of a wealthy family from Delhi, have an arranged marriage and fall in love with each other during the engagement period (which lasts the entire length of the movie). Yes, the plot of this one really can be summed up in one sentence.

So this film has a sort of independent feel to it that I’m not sure how to take. In purest terms of movemaking quality, it was probably one of the worst quality Hindi films I’ve seen (not the poorest because that’s the film I watched the next night, Mere Baap Pehle Aap, which was by far the worst-quality film I’ve seen ever in any language). Maybe it’s because I’d just recently watched the gorgeousness that is Devdas a few days before, but the quality of the filters and camerawork in Vivah really bothered me.

Even worse than the camera quality, which I guess you adjust to, is the music. A couple of the actual songs were somewhat intriguing, but the background music during scenes, ugh! It was like Tetris was going on in the background or cheap telenovela (soap opera) music. Even when the movie had some quality moments, they were cheapened to soap opera quality with this music. So basically, with the camera angles and the music, the movie becomes a bland blur.

To further sink into the blandness, the whole story feels really bland. The first meeting occurs, the arranged engagement happens, the two families bond while spending time together, and then separation as Prem goes back to Delhi and his family business. There’s the typical class conflict of Poonam’s family not matching the wealth of Prem’s, but it’s negligible since Prem’s entire family seems disposed to accept any and everything with open (or extended) arms. Poonam and Prem being separated, there’s some time talking on the phone, briefly being reunited…

It’s all bland. The only hint of spice to this film is the fact that Poonam is an orphan and her “parents” are her aunt and uncle. Her uncle Krishnakant favors her and she’s prettier (and less obnoxious) than her younger sister/cousin Chhoti, and so her aunt majorly resents her. But even that is, to a degree, muted because the aunt just sits around like a bump on a log most of the time looking like an angry toad.

I feel like what happened was that this film was done on the fly with an outline in place of a script. So it’s mostly just “this is the general direction… let’s let the actors take us there.” And this isn’t a good, zingy no-script, off-the-cuff like say Robert Downey Jr.’s improv dialogue in Iron Man, if you’ll pardon an American comparison. Maybe it’s because I’m a writer and a word person, but I feel like I can’t enjoy a film if the dialogue isn’t done well, and this… well, wasn’t really done well. Like I said, I feel like an outline was written rather than a script.

It really is perhaps an actor’s worst nightmare, a true test. And Shahid Kapoor rises to the occasion. As the shy but head-over-heels must-steal-time lover, Shahid is wonderful. And his dialogue is probably the best. It’s true that I adore Shahid and it’s possible my judgment is clouded by the beauty that is his face, but he’s the thing that I feel really makes this movie.

If he rises to the occasion, the also-beautiful Amrita Rao doesn’t; she succumbs to the blandness. Maybe her character was written to be reserved and quiet, a demure blushing bride, but Poonam has ZERO personality. I won’t pass judgment on Amrita and this one may be explained by the bland script, but this was the most boring character ever. The film finally attempts to reach a climax by having the Krishnakants’ house catch fire the day before the wedding. Poonam gets severely burned while saving Chhoti, which of course finally earns her aunt’s respect. In the hospital, I feel like Amrita’s finally given something to work with, and it’s pretty decent. But seriously, it takes getting nearly burnt alive to give this girl some personality? Major flaw.

Then, wonder of all wonders, Prem and family show up at the hospital right before Poonam goes into surgery. Despite the fact that the doctor warns that even family might abandon Poonam because she’s so badly burned (everywhere except her perfect face, of course), Prem and crew once again take everything in stride. Prem marries Poonam in the hospital to prove it and takes responsibility for her medical decisions. It all happens just a little too quickly, too.

I felt like Prem ended up being both the man of the relationship (stealing time and glances, being the initiator, etc.) and the woman (caring for her in the hospital, having all the personality, etc.). Basically Shahid Kapoor takes on shouldering the whole weight of the relationship. And I mean, I know Shahid’s got enough gorgeousness for both of them, but come on. He wouldn’t think twice about a woman he doesn’t really know that much and is arranged to marry who just went through severe trauma and is so upset about the way she looks that she even asks him to leave? And when she asks him to see how burned she is, he declines without a thought?

Also, after getting so used to the norm of Bollywood that goes to extreme lengths not to talk about sex, this film actually addresses (somewhat) the complication that a severely damaged body brings to, well, a new husband and wife (they have the wedding ceremony after Poonam’s recovered and on their wedding night, Prem finally “takes his right” to dress her burns himself). I was actually happily surprised that it did.

Even so, that was just about the film’s only pleasant surprise. It wasn’t bad; the whole thing was just supremely bland. (Which actually, I ultimately find hilarious because Vivah resembles viva, the vibrant Spanish word for life.)
Posted by The Mighty Mango at 12:21 AM