The ridiculous image I can't seem to shake: Hrithik Roshan as Superman

I know this is totally coming out of left field (is there a cricket equivalent to that baseball idiom?), but I haven’t been able to get it out of my head since I found a GIF of Hrithik in Na Tum Jaano Na Hum that somehow struck me as Superman/Clark Kent-esque.

Who better out of Bollywood to play Superman than Hrithik? I know that question is in and of itself UTTERLY absurd considering — who’s going to come snooping around Bollywood to cast an American icon? (Letting Henry Cavill, a Brit, play Superman is also just weird. To me, at least.)

But setting that aside, let us consider a few marks in his favor.

Who has better muscles in all of Bollywood? Answer: No one. (Sure, there are some others that have very impressive physiques — John Abraham and Salman Khan come to mind— but none of them quite have Hrithik’s chiseled look.)

Previous Supermans — George Reeves, Christopher Reeve, Dean Cain, Tom Welling, Brendan Routh, Henry Cavill — have all been dark-haired, tall, striking gentlemen with mostly long, straight noses. Mostly light-eyed, too excepting Dean Cain (although sometimes filmmakers have gotten way out of hand with playing up blue eyes). For all of which Hrithik fits the bill again (though I’m pretty certain he lightens his hair these days). 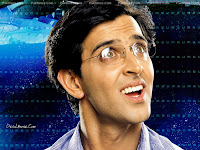 Transformation from nerdy journalist to suave superhero is a must for any would-be Superman. I’m convinced Hrithik can manage.

Hrithik has already played a superhero with alien powers in Krrish. Has to count for something, right?(Admittedly I haven’t seen any of the Krrish movies, yet...)

The only major drawback is that Hrithik has to convince us somehow that he crash landed and was raised in Kansas. But, eh, he can manage that one challenge, right? After all... he'd be Superman. :)

Now the real question is... Who would be Lois Lane?

EDIT: I’m apparently not the only one who thinks this. (Ignore the comment there about Hrithik being one of the few good Indian actors; we all know there’s more than one way to skin a cat. ....and again with my American idioms.)
Posted by The Mighty Mango at 12:44 AM