I was disappointed earlier this year when Aiyaa didn’t come to the theaters here. Now that I’ve watched it online, I can kind of see why it didn’t. This movie is a hot mess. And yes, it is hot, and yes, it is a mess.

I love Rani Mukherjee like nobody’s business. If you told me to pick one Bollywood actress, she’d be it (if Kajol wasn’t retired, she might give Rani a run for her money in my affections). I just got through telling someone there isn’t a Rani Mukherjee performance I’ve seen that I haven’t liked.

Oh, yes, I still love Rani Mukherjee. But this movie is a giant pile of WTF.

Rani plays Meenakshi, a bubbly Marathi girl who’s obsessed with filmidom and lives with her head in the clouds — can you really blame her when living in reality means behind a Dumpster in a house shared with a scolding mom, inept father and just plain weird brother who won’t work?

Then she goes to get a job at a library and the interviewing boss is supremely creepy and sounds like he’s selling her into prostitution...yet all she does is work in a library.

Albeit with this finely frightening specimen who has no real purpose in the film:


Oh, but while there, Meenakshi sees Surya (Prithviraj), a Tamil artist. Head-over-Bollywood-heels in no time flat. Meenakshi is in fact so smitten with Surya that she goes around asking everyone about him. What she comes up with is that he’s on drugs, doesn’t sleep (because he's too busy doing drugs!), squandered his father’s money and so on.


But, y’know, she can’t help being in love with him — the guy she never speaks to. So she begins learning Tamil so she can impress him by speaking in his own tongue. But alas, sully Surya is unimpressed and does not reply, even in Tamil.

Let the games begin.
The stalking games, that is.

Following someone around because you love them is popular in Bollywood (off the top of my head: Love Aaj Kal (retro storyline), Bombay, even Barfi and Dabangg to a degree). And there’s some Bollywood creeper precedent of Shahrukh Khan sneaking into Rani Mukherjee’s room in K2H2 (bed intruder, yaar) and Aamir Khan sneaking into Kareena Kapoor’s bedroom in 3 Idiots.

But Meenakshi takes it to a whole other level, yo.

Meenakshi follows Surya everywhere. Around campus. Into the bathroom. Home. And she even goes to his house under false pretenses to meet his mother — and steal a painted on T-shirt from his room.

Oh, yeah, and Meenakshi and her brother try to buy drugs so she can smell Surya’s scent.

Aiyaa! (Aside: part of me wonders if aiyaa passed into Hindi usage from the Chinese term āiyā, an expression of surprise or a mild curse.)

And then of course amidst all of this, Meenaski’s family is searching for a suitable husband for her. But somehow nobody wants to make an offer.

And I respond: WHAT! Stalkerish tendencies aside, who the hell WOULDN’T marry Rani Mukherjee?! (Other than SRK passing over her in K3G for Kajol, anyway.)

Ahem, anyway, the family eventually finds a sweet if dweebish and possibly gay fellow named Madhav. But while Meenakshi likes him well enough, he’s definitely not stalkable like Surya (though she does stand outside Madhav’s door and watch him get dressed...). So of course she’s conflicted between this impending marriage and her tendency to come apart at the seams any time Surya’s within 100 yards.


Oh, and along the way, we stop for some incredibly sexy dance numbers that Meenakshi is imagining  in her head with Surya. By God, Rani Mukherjee can dance and she has to be one of the sexiest in Bollywood (and 34! what what!).

BUT one of these happens to be the biggest Bollywood WTF song I have ever seen (and that’s including the insanity that is Oh Darling, Yeh Hai India). I get that it’s one big joke about South Indian masala — er, South Indian film star is liking this? — but still... WAT IS THIS BUSINESS?!

Meenakshi, you are certainly a weird one.

And no one lets poor Prithviraj talk until the end, when Meenakshi — on her engagement night! — stalks him to his late father’s factory — where he works all night for money has not squandered — and finds out HE DOES NOT DO DRUGS; HE MAKES INCENSE. This revelation is so much that she must, of course, faint. And thus our dear hero*, after carrying her and awakening her, finally speaks!

And what does he tell us? That without acknowledging Meenakshi all film long, he has noticed her stalking. That while Meenaski’s family has been trying to “push her out of her home” (an allusion to her unhappy impending nuptials), she has been trying to “enter his home.”

And somehow he is not only okay with all of this BLATANT CREEPINESS, but he says, “Hey, yo, let’s get engaged!”

Yes. On the night she was supposed to be engaged to another man, she instead becomes engaged to the man who hasn’t spoken or acknowledged her all film.

...yes. Thank you, Bollywood, for a happy resolution to stalking. Yes. That is EXACTLY what we needed.


I forgive very, very large amounts of filmi ridiculousness (mostly all things done in the name of humor, I suppose). I’m not so sure on this one. Maybe I would be quicker to forgive it if it were more funny and less creepy.

Well, at least Rani seemed to have fun making this one: 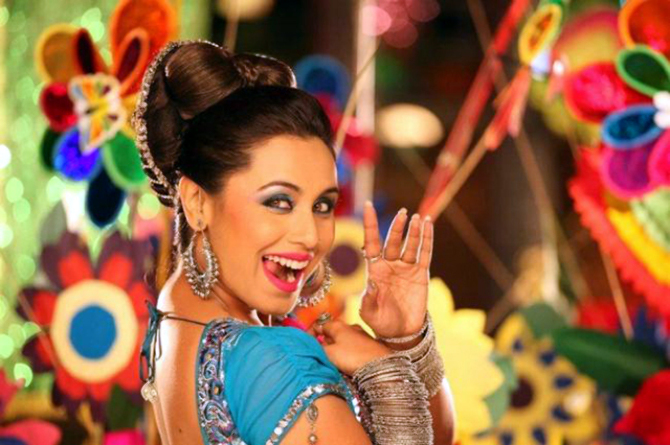 *“Prithviraj is so handsome, he is the heroine of the film. He has been fully exploited by the director as he has had to strip and go bare-chested, six pack and all. Usually in Hindi films, the heroine has to look hot.”- Rani, in an interview

^ this is frighteningly true about this film, and though Rani definitely looks hot, this is definitely a heroine-centric film of which she is the star and Prithviraj is the arm candy. I’m not so sure how I feel about that, though I can say part of me is happy that there is such a thing as a heroine-centric film with the man riding shotgun.
Posted by The Mighty Mango at 5:48 PM