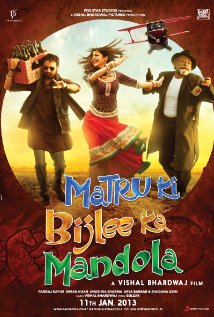 Synopsis: Somewhere in Haryana, Harry Mandola (Pankaj Kapur) is a wealthy industrialist who wants to take all the farmers’ land and build some kind of car plant — only Harry also loves getting drunk, and when he does, he gets into mischief and thwarts his own plans. His servant Matru (Imran Khan) — supposedly working off a loan from attending law school? — is supposed to keep him from getting drunk and acting crazy, but he’s secretly Mao, champion of the farmers, so he likes drunk!Harry. Then there’s Harry’s free-spirited daughter Bijlee (Anushka Sharma). To secure Harry’s factory and power, Bijlee is set to marry bumbling idiot Baadal (Arya Babbar), the son of Minister Chaudhari Devi (Shabana Azmi), who enjoys playing footsie with Harry during important meetings.

Oh, yes, and there are lots of pink buffaloes. (Harry’s mind supplies them when he stops drinking beer — with pink buffaloes on the labels — too fast.)

So, maybe we should start with the fact that I have something of a mixed history with Vishal Bhardwaj. I loved Omkara, couldn’t finish Kaminey (too confused, though I want to try again) and have absolutely no desire to see 7 Khoon Maaf.

Well, Matru Ki Bijlee Ka Mandola left me no clearer on my opinions of Bhardwaj. I thought parts of the movie were great — some of it is hilarious, the cinematography is great, the songs are catchy — but overall, the thing left me thinking, “WTF am I watching?” And not because of the pink buffaloes — those were more understandable.

Oh, and don’t get me wrong. I’m totally down with the dung-throwing drunk-stumbling pink-buffalo type of humor.

And the plot had some great darker twists — like poor Bijlee contemplating suicide and then getting drunk in order to bear her wedding to Baadal — but I think you can tell from the moment that Shabana Azmi steps on screen that the big bad politician will lose and Harry will choose his daughter’s happiness and the plight of the villagers (and retire from his wild drinking).

So overall, I think perhaps I was bored because I knew where it was going, and the slow, drawn-out pace didn’t help. It was so slow and dragging at some points that I wondered if the film crew was drunk-slurring its way through the entire movie. (By the way, drunk!Mandola is nearly impossible to understand. I think subtitles would be necessary even for the Hindi fluent.)

Even Anushka Sharma and Imran Khan — both of whom I love — didn’t help this one.

The rich man’s rebel daughter is a such a great character of possibilities, but I don’t know if Bijlee’s presence is really ever earned in this movie (except for the getting drunk in order to go through her marriage). And Matru’s presence in the Mandolas’ household is kind of underexplained and even undeserved; Imran has his moments, but I found Matru a mostly lackluster accessory to scenes where he just played Harry's shepherd or told angry villagers what to do.

Basically, for a film named for the three main characters, I was underwhelmed by the development of Matru and Bijlee.

Hey, at least the music was good and I got a few laughs, right? Err, right.

One of the people I went with — part of the new Bollywood Movie Club of Tampa Bay! — said, “Well, since everyone spends half the movie drunk, maybe you have to be drunk to fully appreciate it!” That sounds like a good idea to me. Next time, I’ll bring a bottle of rum.
Posted by The Mighty Mango at 12:42 AM