So this is probably going to be one of the smallest posts that we'll ever have here at Bollywood Queens (despite the fact that I'm sure it'll be longer than I intend).

In brief, do not get tricked into watching this film! I picked it up off of a cheap DVD rack because it was a 90s film with SRK that I hadn't heard of, and, well, it was $4. Joke's on me. This was the absolute strangest thing I have ever seen in my life and the one classification that this film falls under is "WTH?!" Because that's what you'll be saying through the entire film.

All sorts of bizarre things happen in this film. It opens with a truckload of rowdy hookers riding down Marine Drive singing a "come hither" song. I should've known right then and there that this film was going to be a bizarre one. And when Anupam Kher showed up and he had hair, I really should've known; Anupam Kher barely had hair in DDLJ, which came out the same year. And "bizarre" is the understatement of the year. I watched a hooker beat up a guy with her boobs, a don's son dance like Michael Jackson to intimidate people, and an auction to sell India to the highest bidder. ...yes, you read all of those correctly.

Ignoring all of the completely strange things that happen in this film, even the premise is strange. A hooker bored with being a hooker, "Miss India" (Deepa Sahi), meets a homeless, down-on-his-luck-but-not-spirit actor who cops beat away from sleeping on railing, "Hero" (Shahrukh Khan), and promises him a meal if he'll entertain her for the night. Well, it turns out that said hooker is also the particular favorite of a big don's son, Prince (Javed Jaffrey), and he's not willing to let her go. At the same time, Prince's father Don Kihote (read: Don Quixote) (Amrish Puri) is launching a plan to take over India by replacing the president (Anupam Kher) with a surgically engineered lookalike (also Anupam Kher) who will then auction the country off to him.

Oh, yeah, this film is nuts. And you know those movies that are so bad they're funny? Well "Yeh Hai India" has its moments where it's so absurd it's hilarious, but for the most part, it's just a wth kind of bad.


Also, I know that Bollywood films have a bit of a tendency to be a decade or half a decade behind the U.S. with trends (i.e. Kuch Kuch Hota Hai <3 circa 1998 watches like Saved by the Bell circa 1989), but this film was probably the most late-1980s film I have ever seen despite the fact that it's from '95. I was constantly reminded of early Full House and definitely Teenage Mutant Ninja Turtles (which came out in 1990 but is pretty 80s). That was at least somewhat fun. As were the following botched subtitles (fyi, check out Paagal Subtitle for the best of this kind of stuff!): 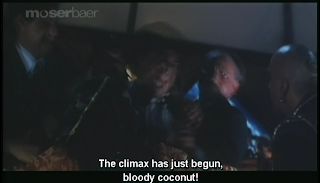 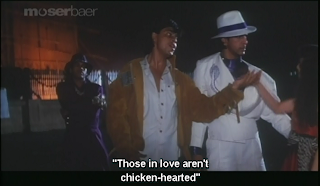 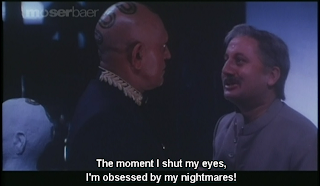 And even in this horrible-quality film as basically a hobo, Shahrukh is a real charmer. Even with this horrible material, the man was obviously a star. Thank God DDLJ followed right on the heels of this one and catapulted him up to his rightful place.

Speaking of DDLJ, I must also address Amrish Puri who, it would seem, worked with SRK thrice in 1995: here, DDLJ and Karan Arjun. Amrish Puri scares the living daylights out of me. He was scary as Simran's dad in DDLJ. He was seriously frightening as a maniacally scheming murderer in Karan Arjun. He was downright terrifying in this film as a don plotting to cause mass mayhem and murder. I am SO not kidding. I have never seen a villain in Bollywood that scares me more than one played by Amrish Puri. Even with scantily clad dancers prancing around him singing about the coming apocalypse.

<sarcasm> And even scarier is his son, who, knowing daddy's a badfanny, goes and dances people into submission! The horror! </sarcasm>

And for a film called "Yeh Hai India" (This is India), this is the worst portrait of India I've ever seen. Hookers and dons who want to buy the place and cops who beat at a hobo man and crowds/masses that cause riots and set things on fire. The song Yeh Hai India is kind of an interesting across-the-board take on upsides and downsides of India, but it's nothing much special either.

In effect, the only reason I would ever watch this film if I were you is if I were going on a campaign to watch every SRK film (a quest which I probably will formally embark on very, very soon). And even then, I'd think twice.
Posted by The Mighty Mango at 1:03 AM