Continuing Imran Week, we come to what was supposed to be the highlight of the week (that has been less than expected because of certain bloggers' slowness; they swear posts are still coming). Well, it's unlikely to be quite so climatic as we predicted, so this is likely to be brief.

So, I don't know what we expected from Delhi Belly, even knowing it was rated R, but let's just say we were all a mix of over and underwhelmed.

Even after hearing that the language of the film is rather colorful, our poor ears were quite offended. We read that the Hindi version was "less offensive" and we probably should have seen that one. (We weren't in love with the idea of an English-language film in the first place for many reasons.) There's an obnoxious amount of F-bombs in this film. An obnoxious, awkwardly placed amount. The number of times that F was forcefully crammed into the dialogue detracted from everything else. The sex scenes were also mostly just awkward and nothing but that. Both the vulgar dialogue and the vulgar sexual stuff just felt like the film was trying too too hard to be edgy.

The film also has a lot of lead-in that's just obnoxious language and bathroom humor. Seriously, I sat through the first 45 minutes of the film wondering if anything was ever going to happen and where the humor was outside of the bathroom. (And if the bathroom humor could even be called humor; we usually find a certain amount of that hilarious [see: yours truly laughed at every single pee joke in Ready] but this... didn't make us laugh.)

For a stretch, once the plot got kicked into gear, it was really moving along. There was less cussing, more of substance happening and more actual subtle humor that drew laughs. We appreciated getting to stare at Imran, who was looking mighty fine and mighty scruffy. We weren't overwhelmed by this performance from him, though, even if it's nice to see him branch out a little bit. But maybe branching isn't necessarily a good thing: He mostly felt like he wasn't a fit for the role.

And for a film with a premise essentially based on bromance, there was surprisingly little palpable bromance (compared with other great male-trio films like 3 Idiots, Dil Chahta Hai and even kind of Thank You). And there was also not nearly enough chemistry flowing between Imran and Poorna Jagannathan to win us over. (And for that matter, I was kind of annoyed with the idea that wealthy, prissy Soniya was so in love with the idea of marrying Tashi, who was basically a slob fruitlessly chasing a serious journalist's career.) 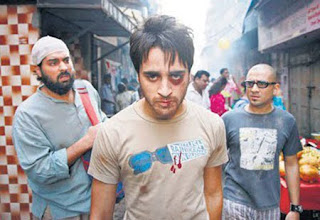 Oh, and as a journalist, I have an ever-increasing thing about the portrayal of journalists in film (sleazebags or crusaders; most of us are neither) and this one SUPREMELY bothered me. It's a horrible representation of our profession, way of life and codes of conduct (for example no self-respecting newspaper would let a journalist who went through all of that personally and committed crimes, etc., in the process write an article, especially of that magnitude, due to conflicts of interest). Oh, and on the note of Tashi being a slob, journalists are often known for being a bit lax, but anyone chasing the career of "serious" journalism doesn't seriously pursue it being a slob. (Another note being that I hate the stereotype of the writer pursuing being a "serious" journalist; most reporters honestly aren't like that and being a "serious" reporter is essentially a soul-sucking job.)

I've been told this film is a realistic portrayal of Delhite bachelorhood, which is perhaps a way of ripping the glimmering "Bollywood" sheen off of things. But then, to me, this begs the question... Is a comedy really the way to go with that? If you're trying to make a serious point, make a serious point.

Honestly, this was the best part of the film for us. (Also randomly note that we rather enjoyed the music.)

And we'll end it, like the film, with Aamir.

And on a note of things to come, despite our disappointment with Delhi Belly, Imran week should continue. Papaya and Kiwi promise me their posts are in the works and will be done around Monday. We'll see how that goes.
Posted by The Mighty Mango at 12:32 AM