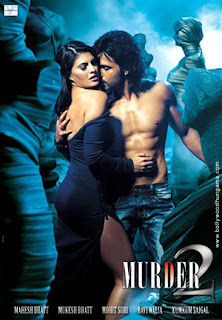 In continuing my sometimes blind quest to enjoy the availability of Hindi films in NYC theaters, I traipsed down to the local AMC by myself today to catch a matinee of Murder 2. Mostly driven by the fact that it was cheap and in Hindi, I went into it not knowing much other than the brief movie summary on the theater’s website, that Jaqueline Fernandez (whose name I cannot get over) was in it, and that it was a sequel. Bright of me, I know.

Well, I was surprised to find out that it’s not the rollicking or ridiculous film I may have been expecting (the name is Murder 2, which sounds super tacky; and the description of the first film sounds utterly ridiculous), but instead a legitimately creepy, terrifying and exhilarating thriller about a psycho serial killer. Don't let the posters fool you into thinking this is just a sexy story between Jaqueline Fernandez's character and Emraan Hashmi's (although there is plenty of sex) — this one's definitely taken over by the killer.

Synopsis (doing my best to give a gist without giving anything away): Ex-cop Arjun Bhaagwat (Emraan Hashmi) is living a confused, drifting life on the edge of Goa’s underbelly, doing jobs for pimps and gangsters while struggling with some sense of morality (he donates to the church though he’s an atheist). He’s also unable to commit in his tempestuous three-year relationship with model Priya (Jaqueline Fernandez). Pimp Sameer offers Arjun a fat sum to figure out why his prostitutes have been going missing, while at the same time cops are searching to find tourist women who have gone missing. Threads lead back to Dhiraj (Dheeraj?) Pandey (Prashant Narayanan), a crazy man who in a burst at the police station admits to killing the missing women while later rescinding that statement. With nothing to hold Dhiraj on, it’s up to Arjun to prove he’s a serial killer and find missing 16-year-old prostitute Reshma (Sulagna Panigrahi), before the night is up.

Before I get into the film, I want to talk briefly about my theater experience watching Murder 2. Now as I’m sure many of you readers also know, being a non-Indian (read: gori) fan of Indian film is sometimes a very interesting experience. I’m usually the only non-Indian in the theater anytime I go see a film (unless, of course, Kiwi and Papaya are with me), even when the theater is nearly vacant. Today was actually different — there were three separate old white men and an older black woman in the theater for this film. And ZERO Indians. THAT was interesting and I still haven’t quite figured it out.

But anyway, onto the film!

I usually LOATHE thriller/scary killer movies (Red Eye is the only one I’ve ever liked) and avoid them like the plague (I don’t see the point in scaring oneself), but this one was actually pretty fantastic. It was smartly done with the killer and the storyline, and the suspense and spine-tingling was quite real.

There’s also a pretty fair amount of gore that amazed me with how well it was done — I mean, come on, let’s be honest, Bollywood can’t even do fistfights well, so how is it supposed to do brutal murder scenes? The answer is I DON’T KNOW BUT IT HAPPENED.

Dhiraj kills several people on-screen and it’s eye-averting-ly (yes, I wimped and looked away a couple of times) realistic and gruesome. After torturing and then brutally murdering women in a room of his house, he then hacks up the bodies and dumps them (some in garbage bags, some not) into a well behind the house. So yes, there is a well behind the house full of DEAD BODY PARTS. EEK! (One of the most gruesome scenes in the movie for me was when Reshma, beaten presumably to death by Dhiraj and then dumped whole by him into the well in a haste, wakes up amid the dead body parts!)

And while we’re on the subject, Prashant Narayanan is ABSOLUTELY FANTASTIC as Dhiraj. Make no bones about it, he is the wicked, demonic villain AND the absolute star of this film (and I am not one of those villain-loving film-watchers either). I thought almost everyone’s performances were pretty top-notch, but Prashant’s is head and shoulders above the rest. He was terrifying and PSYCHOTIC and somehow that I don’t understand HOT at the same time (and yes, I am well aware that this makes ME psycho). As much as this film wanted to be about the cop’s pursuit of details to take down the killer, Prashant’s performance ensures the film is about the killer.

In fact, there’s a section somewhere in the beginning-middle of the film after Dhiraj is thrown in jail and when Arjun begins his quest for details that focuses heavily on Arjun and for a good 20 to 30 minutes or so, the film loses drive and coherency. It was melodramatic and what Arjun was searching for/doing was completely unclear and you lost the grounding, authentic horror-fascination of Dhiraj.

Although that’s not to say that Emraan Hashmi doesn’t mostly hold his own as embattled Arjun. The layers of his character are numerous and deep and fascinating, and they’re wrapped up in a multi-level sort of performance. For example, there’s a fascinating sort of substory about Arjun’s personal battle with lost faith in God that Emraan played out nicely, and I also enjoyed the Arjun-centric part of the film before Prashant Narayanan even stepped on screen (though he certainly raised the caliber of the film once he did).

And Emraan’s not too bad to look at either, although he gets monkey face while making out and HIS HAIR WAS ATROCIOUS. Seriously, this is one of the WORST mullets I’ve seen in a LONG time, and I come from the Deep South, land of the mullet.

While on pure aesthetics, let’s switch to the female “lead” (if you can call her that; she's not around very much), Jaqueline Fernandez. The woman is pretty gorgeous, I’ll give her that, but sometimes she turns her head a certain way and does this mouth thing and, I’m sorry but (and Katrina Kaif can have this problem too) SHE LOOKS LIKE A TRANSVESTITE. It’s kind of annoying because the same expression that produces that transvestite look also gives her this kind of blah DUH face that makes everything feel empty.

If there’s one lagging character in this film, it’s that of Priya. Much of the time, Priya is just as embattled as Arjun, although her primary predicament isn’t religion or morality like his but instead her confused relationship with Arjun. And in that, she’s great. She has a wonderful distraught scene where she, drunk and hurt because he left after promising to stay, confronts Arjun about his inability to commit to her even after she says she loves him. A really fantastic scene. But then sometimes Jaqueline feels like she’s just there for the sex appeal.

For example! Her introduction scene basically has Arjun showing up, seeing her face on a magazine cover and flashing it at her, then her running away only to be pursued by him, pinned... And then we flash to a sex scene (which is about as explicit as you can get without showing any certain body parts) between the two.

Now as a general rule I abhor sex scenes because they’re SO AWKWARD and SO unnecessary and I just don’t want to see that, thank you. I especially abhorred this one because it was long and drawn out and it was a HORRIBLE way to introduce a character. At first, I thought Priya was just someone Arjun picked up at the party after seeing that she was a magazine model; only after the “after” scene did I realize they were an on-again-off-again couple of three years. The scenes with them also sometimes felt oddly placed in the film and maybe too sexed and intimate for a Priya who’s supposedly so deeply conflicted about the whole relationship.

And another thing, on the subject of the “girls who can’t fight”/helpless woman trope I was tweeting about the other day, this film had one of those infuriating scenes too. In the climax scene, Dhiraj has gotten Priya into his house so he can torture, murder and dismember her in front of Arjun. Despite the fact that Dhiraj has tied her hands and feet, Priya is still CLEARLY in a position to kick him, but she just lies there, whimpering and pleading, as he prepares to beat her to death.

However, in a film that hinges on one man’s rampantly despicable view of women (Dhiraj tortures and kills because “women tempt men”), the film actually had some great potential for being pro-woman. There are some fantastic strong women that unfortunately may have not been played to their best. Like my favorite scene of the entire film was probably where a female psychologist is brought in by the police to lock Dhiraj in a battle of the wits that draws out a confession. I wish I knew who the actress is because she holds her own against Prashant amazingly well. Unfortunately, though, she only shows up in this one scene.

Another potentially powerful (young) woman is Reshma, the prostitute “victim” of Dhiraj who survives (due to his slip-up?) and escapes through sheer will despite her terror. Unfortunately, though (spoiler alert), she escapes only to run into Dhiraj, newly released from jail, again, and, well, this time he succeeds. Her death is somewhat necessary to send Arjun over the edge, but I really wish she would have been the survivor.

Also, completely randomly, I really like this song (video is just song, no vid):
Sum total, despite some of its shortcomings and the fact that this type of film is SO not my genre, I really liked Murder 2. It certainly gave me more thrill than I was expecting to experience today.
Posted by The Mighty Mango at 3:04 AM