The long hunt for Mughal-E-Azam, and finding a Mughal treasure


Shopping for Bollywood films is both science and art form. Rare is the film you can walk to Walmart or Target or other major store and buy on DVD (3 Idiots is perhaps the one exception). There are Indian groceries that carry a motley mix of pirated and legitimate, but mostly pirated. If you are very, very lucky, there is perhaps an Indian DVD store. But their selection is never expansive, nor guaranteed, and seeking a particular title is often an exercise in futility.

The new releases quickly show up streaming on Netflix and Einthusan, but the older titles are often hard to find online, especially if you require subtitles.

There are sites like Induna and ErosEntertainment.com to buy DVDs, and almost everything is on Amazon these days. But there is little to no thrill in that. It’s akin to those who complain about buying books on Amazon rather than in a bookstore, only worse. Not only can you not feel the DVD, it feels as though you haven’t given it the treatment necessary for such a rarity. You haven’t searched for the treasure. You’ve merely picked it up and methodically paid.
.
And so sometimes, the hunt for a particular title goes on, and on, and on, and on.

For this reason, I still haven’t seen Sholay. Or Mother India. Or Pakeezah. Or Anand. Or a half-dozen other things.
.
But for one classic, at least, my hunting has ended.
. 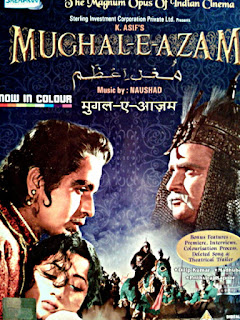 After two years of turning over DVDs in shops with hope, I finally found Mughal-E-Azam at a sort of truck stop in middle-of-nowhere in Rajasthan while busing from Jaipur to Delhi. This was the only DVD I bought in my time in India, but if there was one to buy, I’m glad it was that.

A period piece. A love story born of legend. Mughal history mixed with said legend. Dilip Kumar, Madhubala, Prithviraj Kapoor. I had a very great desire to see Mughal-E-Azam for many reasons. Two years of searching only made it stronger.
.
The same for the elation I felt when I found it on my last day in India, tucked among OMG and Student of the Year, which I spotted first.

But even though the long wait to find Mughal-E-Azam was over, the wait to watch it was not. Between uncharged laptops over 18 total hours of flying and more than 18 hours of ensuing jetlag, it took me almost another week to actually watch the film. (And even longer, you know, to write this post.)
.
But after two years, what was a few more days?
.
In a way I wondered, did the wait build an insurmountable expectation for the film? But now I don’t think I even knew quite what I was expecting. I knew vaguely the story of Anarkali and Salim, the court dancer and the prince, because you can’t be around Indian culture without being exposed to it in some form (even if it’s “Anarkali Disco Chali”). And I knew the film was something of a revered classic.

I can understand why. Mughal-E-Azam is grand, as all things Mughal must be (trust me: I’ve just come home from days spent in Mughalarchitecture), from sets to costumes to dialogues — all contributing to a beautiful film despite the questionable colorization. It is packed with legendary performances and marvelous songs. And full of long dramatic scenes, such as when Salim ascends to his place of execution for a solid five minutes while the sculptor sings, “Zindabad! Zindabad! Mohabbat ae zindabad!” (“Long live, long live, long live love.”)

And it has all the tenets of a great Indian story: forbidden love, class differences, two doting mothers, family issues, the threat of death, separation angst, an invocation of justice, a beautiful woman who could be construed as a prostitute figure (with a heart of gold), sweeping statements about the magnificence of Hindustan. All it lacks is a happy ending (and even its ending is not so unhappy as it might have been).

Mughal-E-Azam is instead a very cyclical story of repeatedly self-sacrificing love.

Salim sacrifices his rights as prince and prepares to sacrifice his life for Anarkali. Anarkali sacrifices her freedom for Salim — refusing to even lie about their love to save herself — and ultimately is the one who sacrifices her life (though she is spared at the last moment from entombment, she must live in banishment and seems mostly unresponsive). Unlike the many Bollywood love stories since, the obstacles to love in Mughal-E-Azam are insurmountable, due to the unflinching power and stubborn will of Akbar — the Mughal so great he was known as Akbar-e-Azam, Great the Great.

It would make an interesting contrast to watch Jodhaa Akbar and Mughal-E-Azam back to back — reconciling Hrithik Roshan’s softened, in-love Akbar with Prithviraj Kapoor’s resolute, heartless Akbar. (Jodhaa seems to have less of a contrast since her love for Akbar is unwavering; Aishwarya Rai’s Jodhaa simply has more youthful sass than Durga Khote’s, which is rather understandable.)

Honestly, one of the great triumphs of Prithviraj Kapoor’s Akbar is that he isn’t hateable, even when his actions are thoroughly loathsome. Who wants to like a man who’s so concerned with imperial honor that he condemns his own son to death? Nobody, of course. Except maybe some sadists. Yet, as revealed in scenes like the tremor in his hands when he sends Anarkali to her last night with Salim, Akbar isn’t the villain of the film. He’s just the emperor, the rule-enforcer, the man-in-charge. The true Mughal. “I swear by Allah I am not an enemy of love,” he tells Anarkali in the end, “but a slave of principles.”

In a way, Salim seems to have inherited the same stubbornness, though it is directed differently. Who else but a stubborn Mughal fights a war he knows he’ll lose against an emperor, all in the name of a dancing girl? Anyone else would have just taken the girl and run.

Anarkali, for her part, is equally stubborn. (Maybe all of the stubborn people in this story really just deserve one another.) Who but one of the world’s most obstinate people could remain still when an arrow was shot at her? And when given a way out of imprisonment for loving above her station, Anarkali doesn’t just say “no thanks.” She instead flaunts her feelings for Salim in front of Akbar … and everyone else. But of course Madhubala carries it off with grace, cheek and flair. Like every song and dance she does in the film. Full of emotions.

The same goes for all that Dilip Kumar radiates in both Salim’s wordless looks of love and very verbal displays of defiance. The scene in which he stumbles about drugged while realizing that he is losing Anarkali broke my heart (while invoking shades of drunken Devdas-style desperation).

It certainly doesn’t hurt that Dilip Kumar is remarkably handsome (because of or despite his perfectly coifed wig? All I can say Mughal-E-Azam is the most attractive I’ve ever found him) and Madhubala legendarily beautiful.

Or, perhaps, that Mughal-E-Azam is an angst and hurt-filled love story fueled by Dilip Kumar and Madhubala’s own heartbreakingly thwarted love story. Both are stories of love versus principle in which principle ultimately wins.

And so, in the end, the story leaves you with many emotions and quite a bit of awe.

It’s only fitting, in a way, that Mughal-E-Azam was a film I had difficulty finding. Nothing about the film seems to have come easy. It took some 15 years from concept to completed project, nine of those years coming after principal photography. Madhubala, already suffering from the heart defect that eventually killed her, fainted on set. Prithviraj Kapoor and Dilip Kumar also suffered physically from carrying around full armor in high heat. And, of course, Dilip Kumar and Madhubala broke up somewhere in the middle of all that.

But some things are worth the wait and worth the suffering.