NEW: Aashiqui 2: An exercise in futility … (and watching a film in India as a non-Indian) 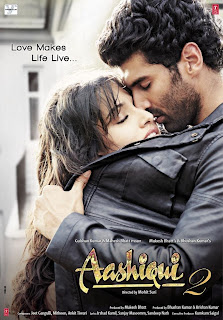 When I was in India (more blog posts on that at my other blog), I was determined to go at least once to the theater. It didn’t happen in Delhi like I’d hoped for, but it did in a smaller, dirty mall theater in Agra. I was trying to see Shootout at Wadala (which I still haven’t seen), but it wasn’t playing at the right time, and I was forced to settle for Aashiqui 2, of which the only thing I knew was that it was a romance (kind of a duh once I figured out what aashiqui means).

I was able to understand more of the dialogue in Aashiqui than I probably would have understood with a subtitleless Shootout at Wadala — I was also perfectly able to understand the teenagers in the line who were making fun of us and our inability to understand the movie (“subtitle hai?” one laughed with a look in our direction) — but enjoyment factor? Much lower than hoped for.

Synopsis: Rahul Jaykar (Aditya Roy Kapoor) is a famous singer at perhaps the height of his fame but attempting to drown it all in alcohol. Drunk driving one night after a brawl at a concert, he almost runs over Aarohi (Shraddha Kapoor). Later he follows her to a bar where he discovers that she too is a singer — “better even than me.” He’s determined to help her break into the music business, even after a manager that he fires for sabotaging the woman he has come to love. The only problem: Aarohi rapidly becomes more popular than Rahul, who can’t handle it and spirals even farther out of control despite maintaining a live-in relationship with Aarohi.

All told, Aashiqui is a nice little love story for awhile. Maybe half. Maybe less.

You might be able to call nearly the whole a love story, but it certainly isn’t nice.

Once Rahul turns back to drinking, it gets ugly. Really ugly. I lost count of the times that Rahul goes off on Aarohi, and it’s gone past the point at which she should’ve left for pure self-preservation purposes long before the film ends.

And yet Aarohi stays with Rahul, who by then has gone past being openly hostile to her success — he’s yelled at her, broken their apartment, stolen money from her, pushed her down, raised his hand to her. I understand that it’s too much to ask for all successful Bollywood heroines be as bold as Konkana Sen Sharma’s Sona in Luck By Chance (she breaks up with Vikram even as he’s apologizing; kya backbone to shoot down a repentant Farhan Akhtar!) but come on. Aarohi is modern enough to live with Rahul without any sort of commitment, but she’s not modern enough to look out for herself once he turns abusive? It’s gone past general self-preservation and into personal safety in Aashiqui. The ideology is just downright dangerous.

And still Aarohi hangs on. Another case of the ridiculous helpless woman syndrome.

I can understand loyalty to a degree, but in this case it’s utterly absurd and even infuriating to make a character stay past so many points at which she should have left. And maybe if she had, it would have helped Rahul see his own self-destruction. As it is, Aarohi keeps picking him up just long enough for him to fall again.

Instead *SPOILER ALERT* we end up with Rahul saying he’ll get help/rehab (after he’s already been through it, of sorts, once in a retreat with Aarohi) — and then killing himself.

It would be tragic, really, if it didn’t come at such a profoundly stupid point in the plot arc.

Yes, Rahul draws on the Devdas aura with his excessive drinking and has a frustrating ineptitude like the Bengali alcoholic of old, but this is not the man who realizes his error as his body fails and dies on Paro’s doorstep. This is a man who in a rollercoaster of a battle with the bottle hits a high note, waffles a bit and decides what the hell, let’s just end it all here, effectively shooting all of Aarohi’s longsuffering support in the face.

I did not need another reason to dislike Aditya Roy Kapoor — every half-assed performance I’ve seen him give before was enough — but I sure did get it. Does he portray the scumbag Rahul well? Well, probably better than any other character I’ve seen him portray, but it’s not exactly a mark in his favor. There are definite moments when you feel for Rahul, but if you’re anything like me, you’ll end up loathing him by the end. He’s not just broken; he’s dangerous, harmful and broken.

I have markedly less hate for Shraddha Kapoor (too many Kapoors!), but neither do I have high praises. She is beautiful and sweet, yes, and somewhat endearing with her innocence, but she isn’t anything to marvel at. Another mostly throwaway heroine. (Honestly, about the same opinion I had of her after Luv Ka The End. It may have improved slightly with Aashiqui, but I wasn’t bowled over.)

One thing I definitely didn’t dislike? The music. It was haunting and lovely and moving in all the right places. Although one would hope for that in a movie focused on two singers.

Sum total? I was very displeased with Aashiqui’s arc, but I’m glad that among all the things I didn’t get to do in India, at least I got to see a film and work out my Hindi comprehension. (Though yeah, I’m still not happy I had to endure mouthy teenagers to do it. I hate teenagers.) Oh, and after paying for the Rs. 275 Platinum reclining, comfy seats at the top of the theater, I now understand why 90 percent of my desi friends like to sit at the top of the theater (rather than somewhere in the middle like most of my nondesi friends).

Understanding is fun, and comfy too.