OK! I would love to be discussing BODYGUARD with you guys right now, but there's just one slight problem with that.

I went to see it at the AMC in Jacksonville, where I've seen several Hindi films with their appropriate subtitles (including the first one I saw on the big screen: Tees Maar Khan). This time, however, AMC decided it felt like screwing us non-Indian Bollywood watchers and cut out the subtitles.

OK, to be totally fair to the folks at AMC, the problem was that they didn't have things proportioned correctly on the screen (forgetting to correct for the different proportions of Indian films from American ones). The tops of heads were often cut off, and subtitles across the bottom paid the price of a smaller screen as well.

Still, I was unexpectedly confronted with my first subtitles-less Hindi film. I've only been exposed to Hindi for about nine months, and it's been sporadic during that time. I know my Hindi isn't the best, but it's been improving pretty quickly, so I hoped I'd be OK -- how much of the dialogue do you have to directly understand in a masala film anyway? -- and stayed in my seat. I was OK up until intermission.

After intermission, I either got tired, things got more confusing or they started talking faster because I reached the limits of my comprehension. By the ending, I had no idea what was happening. I'm both proud of myself for sitting through it and angry at myself for not being at the level of Hindi comprehension where I'm no longer quite so dependent on subtitles.

Let's just say I'm definitely going to have to watch Bodyguard once a subtitles-equipped DVD is available. I felt left out as jokes whizzed over my head. (A multilingual professor of mine once said true comprehension and mastery of a language is achieved when you can understand a language's jokes because of the plays on words involved. I'm obviously nowhere near that level with Hindi yet.)

But these things I can say:

I'm convinced that Sallu is the master of masala. Y'all may have noticed (or maybe not) that I have a seriously swinging love-hate relationship with this particular Khan. Mostly, it's his badfanny, show-offy attitude. If he gives it up and just has fun, I love Sallu. This had lots of him kicking butt and taking names, but I don't think I ever had that moment where he came off as so arrogant I wanted to punch him in the face.

Kareena Kapoor, as you may also have noticed, also has the tendency to get on my nerves sometimes. But then other times, when you give her some depth and some spunk, she amazes me (see 3 Idiots, Jab We Met, maybe even 36 China Town). This was one of those times. I also wanted to steal her wardrobe for about 90 percent of the film.

Divya didn't do much studying for her college.

I couldn't understand most of Tsunami Singh's jokes due to the whole language barrier, but his shirts were hilarious.

The music was not great, but the dance numbers were. I think I've mentioned before that I hate when Sallu does his bump-on-a-log "I'm barely going to move and call it dancing" thing, but he actually moved, so I was happy.

So basically, Sallu, if you want to come be my bodyguard, I'd be OK with that. :) 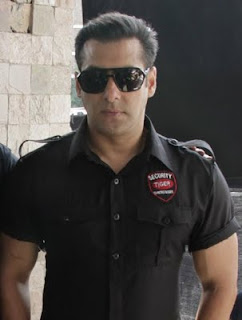