So, as you may have noticed from some of my previous posts, I have a slight love for SRK. Oh, yeah, I think you know that by that I mean a slight(ly ridiculous obsession) love. Basically, Papaya and I are sort of on the cusp of announcing that we’ve embarked on a quest to watch all of SRK’s films. We haven’t “officially” embarked on such an adventure yet, though I’ve been working my way through a rather sizable chunk of his films. Consider this a sort of precursor of much to come. ;)

Synopsis: In 1980s Vasco, Goa, the legacy of Portuguese colonialism lingers in a feud between two rival gangs: the Christian Eagles and the Hindu Bicchus. The town is sharply divided along these lines, with head of the Eagle gang Max (Shahrukh Khan) controlling one half and Bichu head Prakash (Sharad Kapoor) controlling the other, and the matter is complicated by the fact that much of the town’s land is “owned” by the long-dead Portuguese colonial Alberto Vasco. But when Prakash’s idealistic brother Rahul (Chandrachur Singh) comes home from Mumbai, the status quo is set to be upset, especially when Rahul falls in love with Max’s closely-guarded twin sister, Shirley (Aishwarya Rai).

First things first, I really enjoyed this film. That’s usually kind of a given with SRK (unless you COMPLETELY screw it up like “Oh Darling Yeh Hai India,” which I cannot stop ranting about), but overall I think I just really liked this one. The story is good and not exactly traditional and, well, it’s Aishwarya Rai and SRK. Plus it’s legit 1980s instead of the weird retro thing that a lot of Bollywood films have going on like I was talking about in my Yeh Hai India post.

But, true to nature, there were lots of small things in the film that were bizarre for me.

One, I’m so not buying Aishwarya Rai and SRK as twins. I mean, come on. Just look at them. Those are some of the most fraternal twins I have ever seen. Plus when it’s revealed in the end that Max and Shirley are actually Alberto Vasco’s illegitimate children, I was like, “Now, come on. Aish could easily be half white. Shahrukh, not so much.” That being said, they were a fantastic brother-sister duo, and I think I liked how they played off of one another in this better than even Devdas. SRK as Max reminded me of my protective big brother, and charming SRK played a street thug very well even when his material was questionable. (Yeeeah, I realized that this movie is kind of a precursor to Don. SRK plays a thug who’s a local badfanny but still a good kid at heart, a stepping stone on the way to a cold-hearted mob boss who’s an international badfanny.)

And Aish was also a great do-gooder-but-rough-around-the-edges-and-proud sister too. Classy Aish, Miss World and the most beautiful woman in the world. I loved seeing her in this role with her frizzy 80s hair and her snarky distaste for men that chased after her. And even when she fell in love with Rahul (quite “accidentally”), it was OK with the character.


What was not OK was the fact that after she fell in love, the girl who wore a skirt to church just to tear it off for shorts to ride a motorcycle afterward just randomly starts wearing dresses in every scene. That was bothersome. Some girls don’t like dresses! And that’s OK. And love doesn’t have to make a girl girly! (Despite what my favorite film Kuch Kuch Hota Hai may lead you to believe.)

More amazingly puzzling wardrobe choices: What’s up with badfanny Max rocking a fannypack to carry his gun in?

And speaking of bothersome wardrobe, there were a million random American things in this film! Like why do biker gang members in Goa wear American flag and Texas bandanas? And Buffalo Bills sweatshirts? And why does Rahul have a USA track suit? And where did a baseball (not a cricket) bat come from? All of these are mysteries without answers. 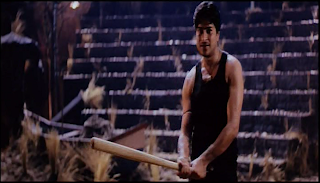 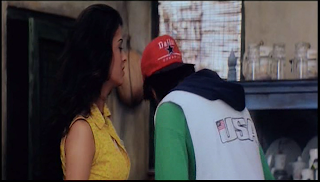 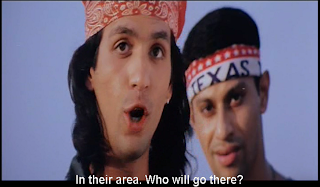 Oh, and while we’re talking about mysteries without answers, how about answering for me why badfanny Max is so crazy head over heels in love with the most prim and proper church girl in town, Roseanne? We know supposedly that good girls fall for bad boys, but bad boys chasing after good girls?

It also is kind of annoying that Roseanne sort of disappears for the most part after Max manages to woo her. In all of the end drama ensues where Max is on trial for killing Prakash, Roseanne is barely there.

As occasionally odd but sweet as Max-Roseanne jodi is, it wins because it gives us SRK talk-singing. ;)

Another thing that I find intriguing — perhaps not bothersome but certainly intriguing — is how little religion tension there is for a story that bases itself on a religious divide between a Christian gang and a Hindu one. Accusations of, “You Christians!” fly occasionally in one direction; similar accusations don’t go back at Hindus, which is probably a strategic move to not alienate a mostly Hindu audience.

That being said... Check out this blooper of a cross on a wall in the Hindu half of town.

And now just a couple of random notes.

Dance at which they do awesome tango-swing dancing to a Spanish song (Lola, Lola por Ricky Martin)? Awesome. (Puedo hablar español, y como ustedes ya saben, me encantan todas cosas hispañas.) Things getting lost in translation like “kutta,” which the subtitles alternately translated as bastard and dog? Added humor/levity (somewhat more so once you realize that by dictionary definition, Max is a bastard). Things based in Goa? Beautiful.

New comments are not allowed.