Synopsis: In Goa’s flashy China Town, a motley crew of folks ranging from a struggling actor, a scorned bride, a gambling-addict hotel owner and his wife, a would-be Romeo and a couple on vacation get embroiled in a murder mystery when casino owner Sonia Chang turns up dead. Hard-nosed Inspector Karan (Akshaye Khanna), who seems to fancy himself a modern-day Sherlock Holmes, then goes on a quest to sort out the tangled web and find the killer.

Picked this up from the DVD store because Shahid Kapoor was on the cover and also Kareena Kapoor and Akshaye Khanna. I’d never heard of it, but seeing those three, I was like how could I not have?

I didn’t know what to expect (36 China Town is a kind of vague title), but when I realized it was a murder mystery, I braced myself for the worst and prepared to just enjoy staring at Shahid.

And then it didn’t happen. The film was pretty solid. I actually felt suspense even though I pretty much could guess what was going to happen (I have a rather uncanny knack for predicting “twists”; writers everywhere are not as clever or original as they think). I mean, I wasn’t terrified or anything, but I held my breath when certain characters were unknowingly trapped in a house with a murderer and gasped a little when a dead body fell out.

And then on top of it, it wasn’t just a suspenseful murder mystery. The story is about a whole bunch of innocent, well-meaning folks who are connected in some way to the murder but keep lying about their connection so as not to seem guilty. And it’s hilarious. There’s antics about bodies being stuffed in suitcases (kind of gruesome)...that a couple then tries wildly and fails to get rid of on a train (hilarious). In a way, it reminds me of Clue, more of a whodunit than anything else. (Like bodies being stuffed in suitcases can go one of two ways: Law & Order, where it’s, “Eek there’s a body in a suitcase!”; or Psyche, where it’s like, “OMG, I can’t believe this; there’s a body in a suitcase!” This film is a mix but mostly the latter.)

And the slate of characters that runs through this one... Man, it’s crazy. There are so many quirky people, and the cast gets more and more entangled with every passing moment. If you’ve seen Welcome and you know how the plot gets increasingly more complicated in that crazy way that makes you go, “Oh, God... This is so... convoluted!” every couple of minutes... You should have a good idea of how 36 China Town operates. Everybody and their brother gets mixed up at least once with everybody else in this film.

My favorite set of characters are Raj and Priya, a struggling actor and a scorned would-be runaway bride who find Sonia Chang’s missing son and set out to bring him home for a reward. Shahid and Bebo had such lovely chemistry. It makes me somewhat sad that they aren’t together anymore (no offense to Saify-poo). This wasn’t perhaps on par with Jab We Met (which turned out fascinatingly well since they broke up in the middle of filming) but it’s still up there pretty close. And again Bebo didn’t get on my nerves!


Akshaye Khanna did, though. I will say that I love Rahul much more than his younger, fairer-skinned less beautiful brother, but I usually like Akshaye. Loved him in Dil Chahta Hai and Tees Maar Khan (Osssccaaaaaaaaaaaaaaar!), even liked him fairly well in Mere Baap Pehle Aap, which I despised as a film. I think it was more of a seeping annoyance with the character of Inspector Karan and the poorly arranged deductive reasoning a la pseudo-Sherlock Holmes (I have a very deep love for the original Sherlock Holmes), but for as many of these annoying cops as there are in film, this is the first one I’ve been so thoroughly annoyed with. Every time he showed up on screen, I groaned.


Another groaner is Upen Patel playing Rocky. He kind of annoyed me in Namastey London (although a lot of things kind of annoyed me in Namastey London), but he definitely annoys in this film. He plays a playboy who repeatedly uses the same lines but gets no good results. AND they're the most ridiculous lines too! "Your dad must have been a terrorist because he sure knew how to make a sex-bomb." SCUSE ME, WHAT?! And still he goes on his way, thinking he’s all good. Oh, also, he’s a playboy but can’t defame women in public -- as in he can sleep with them behind closed doors, but he won’t tell about it. The assumption is because he respects women (though by his lines he obviously doesn’t); these folks need to see Thank You and Akshay Kumar’s Kishan, a reincarnation of Lord Krishna who loves women in all ways.

Tanaaz Currim as Ruby and Payal Rohatgi as Gracy play the wives of two gamblers -- one poor and the other (formerly) rich -- who are controlling and keep their men in line. Ruby also wins tons of money and puts her husband to shame with it. Here, the ladies rule the roost.

Their poor can’t-keep-on-the-straight-and-narrow husbands K.K. and Natwar are played by Johnny Lever and Paresh Rawal respectively, who are always welcome comedy schlubs as far as I’m concerned. Johnny Lever has amused me since Kuch Kuch Hota Hai (my second film), and despite what others say, I’ve honestly never not found him less than amusing. Paresh Rawal is also always fun as the poor schmuck who gets all kinds of crap done to him (see: Ready, Welcome, etc.). BUT there is one major drawback of Paresh Rawal being in this film. 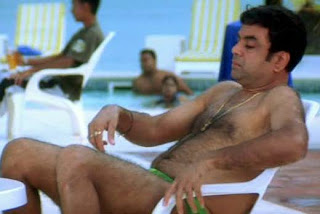 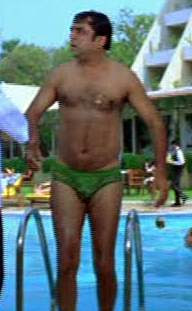 Paresh Rawal in a speedo! EEEEEEEEEEEEEEEEEEK! I think my eyes will never recover! (And now you must also suffer with me. Mwhahahhahaha.)

To maybe help you recover from that (maybe), Piggy Chops makes a cameo.

One thing I will say that kind of perplexed me about this film was its setting, which seems to roughly translate to a version of Vegas. I didn’t know until this film that Goa had a China Town, and personally no Chinatown that I’ve ever been to is even remotely like the China Town of this film. I actually find it somewhat funny considering India’s proximity to China.

But something else bothers me about this setting. In my literary study of colonialism, I’ve also learned a great deal about literary tropes and practices like exoticism and, a particular form of exoticism, orientalism (especially as defined by Edward Said). Exoticism in its most simplified form is using something foreign for the sake of using something foreign or exotic, basically reducing the culture to a distinct foreignness and not much else. Yes, there is a fine, fine line between being influenced by a culture and reducing it to exoticization, and I feel this film steps somewhat into the latter.

This film engages in exoticization of China Town; China Town is foreign and Other (set apart from regular Indian Goa), swathed in bright colors and druggy, dreamy sequences, oversexed and embroiled in all forms of sin (drinking, gambling, etc.). The “foreign” place is full of intrigue and it cannot be fully understood simply because it is foreign; rules of decency common to the civilized and dignified homeland of the exoticizer do not apply, so murder is allowed to happen. (Perhaps the classic literary reference I can point you to is Wilkie Collins's The Moonstone; historically, exoticization is a colonial practice often applied to India.) In these ways, the film engages in exoticization (of Chinese culture), a form of racism historically descended from colonialism. Ever since taking a semester course on exoticism, I see it everywhere (I’ve written an essay about its prominence in the space-western TV series Firefly) and it bothers me.

I think I first noticed it in this song, touting the “unique” nature of China Town.

And speaking of songs... The choreography and dancing for this film – superb! Shahid’s always a brilliant dancer, and Upen Patel’s not shabby as a dancer even when he is a frustrating actor. Watching this one really made me realize that the last few films I watched before this were really not well-choreographed. But the sets for the songs – ridiculous! Someone was on crack! Case in point:

But then, this is a zany Bollywood whodunit. Maybe insane song sets were called for.
Posted by The Mighty Mango at 1:03 AM