The universe must just know about my no-subtitles resolution.

I chose to go without subtitles on Black, but my resolve wavered when I took up HAHK (can you believe I hadn’t seen it yet?) on YouTube late one night. Exhausted that day, I left the subtitles on. Somewhere around 30 minutes in, I fell asleep sitting up, glasses still on my face.

The next day, I took up watching it again at a more reasonable hour but left the subtitles on.

Lo and behold, the subtitles died less than halfway through.

Ah, universe, how you taunt me.

This was hardly a new experience. I had a similar problem with watching Maine Pyaar Kiya on YouTube more than a year ago. But that was way, way before my subtitless days, and I actually abandoned MPK after intermission when the subtitles went.

With HAHK, I knew it was a test of myself.

In some ways, I failed the test. I lost complete track of who everyone was (except of course Prem [Salman Khan], Nisha [Madhuri Dixit], Bhabi/Didi Pooja [Renuka Shahane] and Rajesh [Mohnish Bahl]). In a movie that’s basically about two families melding, that kind of understanding might have been important. But family relationship words are one of the things I’ve always struggled with in Hindi, and it’s probably for good reason (mama vs. chacha vs. kaka vs. phupha vs. massad… I think that’s all the words for an uncle? Lordy, it’s plenty). But it also happens to be very inconvenient when there are no subtitles. 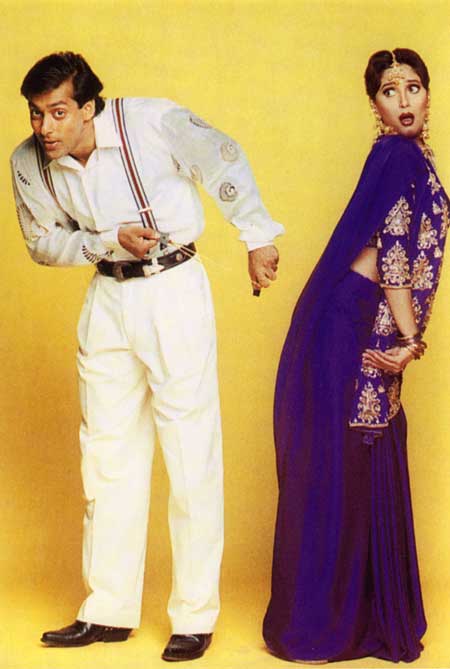 Another failure of mine is in my inability to understand everything when folks start talking fast. Which they inevitably do.

But despite dialogues set to speed, the movie is so simple and straightforward that it really didn’t matter.

A sweet tale of romances and marriages, HAHK just feels so positive and upbeat for the most part — a general heartwarmer, so to speak — that just makes you smile. The story features an arranged marriage and a love marriage, both equally happy and so both capable of making you smile. There is ample flirtation, lots of jokes — so much to just put a smile on your face. (Although like any Hindi feel-good movie, it has to have its dose of sorrows too, namely Pooja’s untimely and utterly ridiculous death and a mixup that sets her widower up to marry her sister, who is in love with his brother. Okay, so maybe that part isn’t exactly simple.)

Watching HAHK, I was reminded how gorgeous Madhuri Dixit is and how I really miss her (her number in YJHD was much beloved!). I don’t think there’s a bad thing to be said for Madhuri playing Nisha in this movie — she is almost always dazzling with her smile and when she is not, she’s drawing you in by being marvelously sassy and coy.

And then young Sallu, so adorably sweet as his ever-favorite Prem archetype, is infinitely more endearing to me than Sallu in his current form. Soft-spoken, smiling, teasing Salman — this is the Salman I prefer over the badass one (although, yes, I have come to love that form of him as well). Who cannot fall in love with Prem? Especially a Prem that is working on wooing Nisha?

Adding to that, as something of an aside, I feel Mohnish Bahl is always or at least often to be seen in harsher roles. I really enjoyed seeing him as well as a softer lover/older brother figure instead.

So, in sum total, even without understanding everything (slow down when you talk, people), HAHK is one to save for rewatching on down days.

Because it is, in a word, endearing.
Posted by The Mighty Mango at 12:58 AM