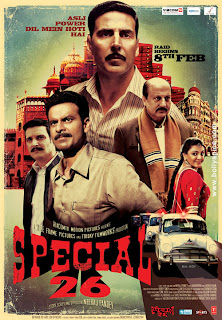 Synopsis: Based on a real-life 1987 heist that has never been solved, Special 26 is the story of a band of thieves who raid and rob businesses, corrupt politicians and the like posing as income tax or CBI officials. And they only steal black money, so the victims don’t like to report it. The crew is lead by schemer Ajay (Akshay Kumar), who is backed by P.K. Sharma (Anupam Kher), Joginder (Rajesh Sharma) and Iqbal (Kishor Kadam). But in the film’s first heist, Ajay and crew dupe police officers Ranveer (Jimmy Shergill) and Shanti (Divya Dutta) into helping them loot a corrupt minister’s home, leading Ranveer to swear revenge and take his case to resident CBI badass Wassim Khan (Manoj Bajpayee). As criminal mastermind Ajay works to plan one last big heist so the crew can retire, police mastermind Wassim is always in step with him.

When I first saw the trailer for Special 26 (read as “Special Chabbis,” not “Special Twenty-six”), I was intrigued and somewhat perplexed by Akki’s presence. If you’ve read this blog at all, you know I love Akki’s wild antics in what most consider “cheap” entertainers and comedies. But Special 26 is a mostly though not overly serious crime thriller, all about the thrill of the heists.

As I described it on Twitter, Special 26 has “face-slapping but no ass-kicking and laughs but no crazy antics.” So yes, it’s definitely not your typical Akshay Kumar flick.

But even if there are moments where you wonder if Akki is completely out of place (there are definite moments where he is), Special 26 is pretty damn good. Probably my favorite film so far of 2013.

The movie does seem to drag for a while in the middle as all of the planning goes into the film’s climax heist, the robbery of a famous jewelry store in Opera House, Mumbai (a.k.a. the heist that’s based on real life). As my roommate (who was introduced to B’wood through this movie on Friday) pointed out, “It’s like watching an episode of White Collar. Three quarters of it is planning the heist; one quarter is actually doing it.”

It’s very true, but don’t let that discourage you because the ending of Special 26 is incredibly worth it.

I always see twists coming — an author’s curse, I think — and I think this is the first twist since Kahaani that has genuinely thrown me for a loop and left me truly pleased that a screenwriter and a director pulled one over on me. It’ll throw you too if you know about the real heist and are expecting the film to follow exactly.

And you might think that all of the heist plotting gets broken up by Khan’s counterplotting, but I found it to be more like an unnecessary rehashing of what “Ajju” and company are planning. Though there are lots of fabulous moments, the overly hard-nosed Khan, in fact, quite tired me for much toward the end. (And he ultimately pays for his arrogance and overconfidence in his own wits, which gave me some satisfaction.)

Someone else who kind of tired me: Ajay’s love interest Priya, played by Kajal Aggarwal. She is the only major female character in the movie, and she doesn’t do much. She shows little scruples about the fact that she’s in love with a robber — and we’re never really told how much she knows or how she knows or how much her family knows — and basically flits in to do a song, express a bit of worry about Ajay’s safety and sneak away from her wedding to meet her super-secret robber-prince in the airport. I feel like Shanti, Ranveer’s lady-cop sidekick, had more screen presence with fewer scenes and none focused on her.

Though I must say I did quite enjoy Kajal’s appearance in Gore Mukhde Pe.

Pretty much after that, Kajal could’ve been clipped from the film and it would’ve been much more seamless and full of great background characters.

Overall, though, she’s a blip on the radar of an otherwise wonderful cast, both lead and supporting. My thoughts on Akki, you already know. And despite the moments of Khan annoying me, Manoj Bajpayee acts as a good foil. I always love Anupam Kher even when he flits around in the background of a film, but here he is given a much more lead role that he entirely deserves. And even those who do flit around in the background are great, from Joginder and Iqbal to Ranveer and Shanti.

In the end, Special 26 is a mostly masterful film that does well with keeping you on your toes and intrigued. The thriller tale is lightened by well-placed and well-executed moments of humor and levity (the theater went wild when Akki delivered off-hand Gujarati and Tamil dialogues to would-be “CBI” recruits). It gives glimpses into what makes everyone tick — criminal and cop alike — thus providing an interesting look at “justice” without losing the very smart plot in the process.

Even if you’re not a fan of Akki — I know he has plenty of detractors — go see it anyway. This is not a film where you have to leave your brain at home.

And in conclusion, I allow myself frivolity: This movie is also one giant collection of sweater-vests and a fantastic collection of mustaches and perfectly coifed male hair. We will now close this post with a much-deserved MUSTACHE PICSPAM.

Maybe Kajal just needed a mustache.
Posted by The Mighty Mango at 11:49 PM