This post! I've been wanting to do it ever since we started this blog, but I just got inspiration again finally and decided to sit down and knock it all out.

So, we all know it happens. Bollywood quite frequently and quite shamelessly rips off Hollywood films. Sometimes it's bad, sometimes it's brilliant. Right now, I want to talk about one that is BRILLIANT in all caps.

I watched Dostana first several months ago with trepidation because I really didn't find Chuck & Larry to be that great of a movie. In fact, I found it pretty much downright unfunny. Personally I'm not the biggest fan of Adam Sandler, but the man definitely has his moments; I find Kevin James definitely funnier though he's also not a favorite.

Well let's just say I was more than pleasantly surprised when I watched Dostana. I was in fits of laughter the entire time, and this instantly catapulted itself into my favorites list. I then made sure that Kiwi and Papaya watched it. Papaya never saw Chuck & Larry, but Kiwi agrees that Dostana is a thousand times better. We now bring you some reasons why, then some rambling/expounding below.

2. John Abraham is a million times better-looking than Adam Sandler and Kevin James. And that may be an understatement.

3. Friendship is a more translatable message than the garbled gay-rights-maybe-law-maybe-sacrifice? message of Chuck & Larry.

5. Music like Desi Girl! (Which is my ringtone. Irony being that I am not a desi girl except at heart.)

6. Kirron Kher (aka Dimples! as we call her) coming in as Sameer's mother presents the horribly hilarious complication of family entanglements that fails with Larry's kids, who are barely around.

7. Chuck & Larry tries to make a comedy from a serious situation (James's character is losing pension benefits as a widower); Dostana is a comedy with a heartfelt basis.

8. Dostana is young and fun, and Chuck & Larry is... not. Kevin James and Adam Sandler are, well, old. And yes, old people are funny too, even James and Sandler (see: Grown-Ups, Paul Blart: Mall Cop), but the youth of Dostana is a definite appeal.

9. Miami > New York for comedy and sex appeal. Florida girls may be biased, but come on, you have to admit you go to South Beach for fun in the sun, not New York.

10. Jessica Biel's character may have more substance and brains than Priyanka Chopra's, but the love story in Dostana (with Bobby Deol) makes infinitely more sense. 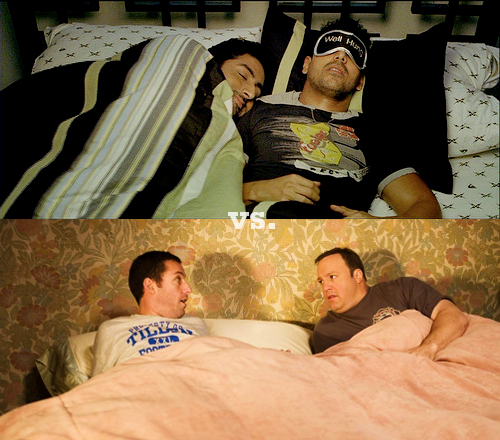 11. Bollywood avoids sex, but even the bed scene was better!

I love Abhishek Bachchan for many reasons. The poor guy is one giant gangly, goofy teenager, though (you probably would be too if you were a 6'3" [195 cm] monstrosity in a country where the average man is 5'5" [165 cm]), and it sometimes makes his "serious" dances in other films... Well, laughable. I'm sorry, but the man is ALL LEGS and no rhythm. Here he just gets to be that wildly hilarious gangly awkward teenager and it's GREAT (again, see Desi Girl). As a matter of fact, I wish Abhi would quit trying to do too many serious roles (taking on drugs and stuff in Dum Maaro Dum) and just have fun more often (or mix them, like in Bunty Aur Babli). 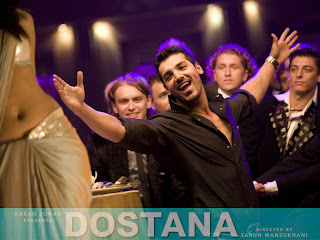 John Abraham is another one that I feel often gets lost in more serious roles. The man is adorable. Like I love it when he makes his goofy-looking laugh face. Let him be adorable. And he's darn hot too. As petty as it sounds, I'm tired of him being in roles where he has horrible long hair and you can't enjoy the beauty that is John Abraham.

And even though the first time I watched it, I thought Abhimanyu (Bobby Deol) was the peepeeman, I have to admit, I became increasingly endeared to Bobby as I watched the film over and over again. And, wonder of all wonders, he doesn't have horrible hair in this one!

But anyway, back to the comparison this post is really about. Really, I think the main problem with Chuck & Larry is that the movie started with an issue and tried to spawn a comedy off of that issue, so it tries to straddle the line between serious ideology-thumping and comic situations and juxtapositions. The two don't really mix. On the other hand, Dostana starts off with a comic situation that gets even worse (when both Sameer and Kunal decide they've fallen in love with Neha), but the whole thing is interwoven (not straddled) with a story of friendship and acceptance (which go hand-in-hand).

Yes, perhaps Chuck & Larry has a more serious and/or tightly written plot, but I'd go to bat with you over the quality of its weaver work. Does Chuck & Larry weave in four love stories (Abhi-Neha, Kunal-Neha, Sameer-Neha, Sameer-Kunal), a kid and a begrudging mom? Nope!

And I will say that on the surface, Jessica Biel's character in Chuck & Larry gets a lot more brains and substance to her (she is a lawyer) than Priyanka Chopra's Neha, who has spunk but ends up mostly being just batted between the three guys that love her. BUT Jessica Biel has to walk around in a bra and underwear and put Adam Sandler's hands on her boobs for sex appeal. All Priyanka has to do is stand up in a shimmering gold one-piece bathing suit.


In case you haven't gotten it yet, I think Dostana puts Chuck & Larry to shame, especially in the laughs department. This film never ceases to make me laugh, no matter how many times I watch it.
Posted by The Mighty Mango at 2:00 AM