In honor of India-Pakistan in the World Cup: Dil Bole Hadippa! (2009)

So in honor of today’s India-Pakistan match (what a loaded thing that is) in the Cricket World Cup (which only Mighty Mango is watching; Kiwi and Papaya are otherwise occupied), it’s only fitting to talk about a cricket movie. Now, as fantastic a movie as Lagaan is, as close as it came to being first, I don’t think a movie could get more perfect for this day than Dil Bole Hadippa! (2009).

If you’re not familiar with it, Dil Bole Hadippa is the Bollywood remake of the 2006 Amanda Bynes movie She’s the Man, which is in turn a loose take on Shakespeare’s Twelfth Night. She’s the Man is on all of our top lists for American movies (Paagal Papaya can pretty much quote you the whole movie she’s watched it so many times).

Thus, we had great expectations for this movie from the get-go, even if we don’t fully understand cricket. Call it what you will, but they just don’t play cricket in our neck of the woods; it’s baseball, which is much, much simpler. (The Mighty Mango had some exposure to the sport when traveling in Australia about six years ago, but that was brief and mostly forgotten.) We pretty much have Lagaan and Dil Bole Hadippa to thank for our cricket knowledge (and now a little bit of World Cup coverage). The story, then, of both She’s the Man and Dil Bole Hadippa revolve around a young girl (Viola and Veera, respectively) who plays a sport (soccer/football and cricket) but has no girls team available to her. The solution? Dressing up like a man and pretending to be your own brother. The complication? Falling in love with your team captain (which being either Channing Tatum or Shahid Kapoor, we can totally understand). The love triangle (which becomes a quadrangle or a pentagon or maybe even a hexagon) is a hundred times more complicated in She’s the Man, but that’s the basic premise.

And everything culminates in THE BIG GAME. (Dun dun dun!) For She’s the Man, it’s a high school rivalry. In Dil Bole Hadippa, it’s a little more loaded: a match between India and Pakistan that India has been losing for several years running, so India’s the clear underdog.

Rani Mukherjee as a man. Come on, this is hilarious even if she is way too pretty to be a man. And at times more believable than Amanda Bynes as a man.

Shahid Kapoor. Mmm. Isn’t this always a good reason to watch a film? The first time we watched it, during the long opening credits, Paagal Papaya says: “Can we fast-forward to Shahid Kapoor’s face, please?” He's as much a reason to watch this one as Channing Tatum is to watch She's the Man.

Shahid and Rani are fantastic dancers. Every song is great just to watch them.

Shahid + Rani when arguing! In this, great jodi. All the wackiness and pizazz and sassy anger works out great. 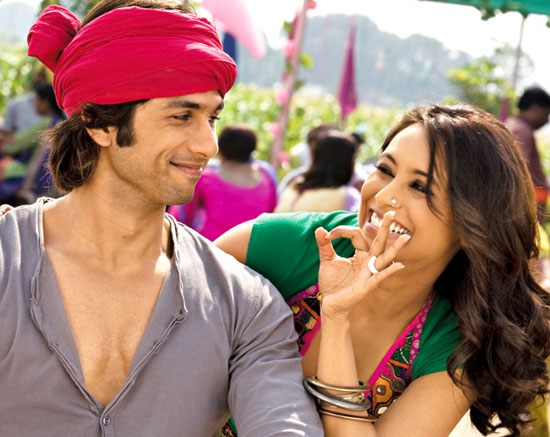 Rani Mukherjee as a man. It may be hilarious, but believable? Whoever’s job it was to hide her womanish figure did a HORRIBLE job and she needed some coaching on masculine body language/movement.

Shahid Kapoor as a British Indian. Not British. At all. Not believable.

Shahid + Rani jodi when not arguing: the sparks leave when the jabs do. A magazine review we read said they prefer Shahid with a younger heroine. While we’re incensed at the jab to Rani (who is so not old), we understand what they mean. Even when bubbly and crazy, Rani has a sense of maturity to her (not a bad thing). Shahid feels too young.

The end resolution feels flat. You never get the actual make-up scene between Rohan and Veera after an explosive argument when he finds out she’s, well, not the man.

The impossible situation of the match. Pretty much all sports movies have this flaw: The climax scene is just not likely. How likely is someone to stay in batting after breaking their arm? Not very. How likely are refs (umpires?) to let someone play with a broken limb? Not very. 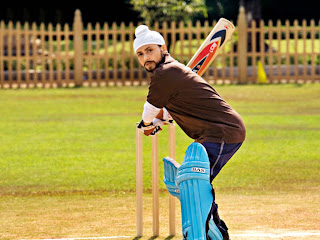 If Mighty Mango can step in briefly with a little bit of college knowledge… In literary studies, we talk about the “willing suspension of disbelief” when reading novels. That is, the author makes the assumption that the reader will come into it knowing it’s fiction and not expecting reality and so the author takes liberties with reality. Films are the same way – there’s a level of willingly acknowledging that things are almost always going to work out too perfectly or that special effects happen in movies that aren’t reality. But the problems with Dil Bole Hadippa aren’t factors that deserve your willing suspension of disbelief – they’re little things that could have been fixed very easily that just got ignored instead.

Overall, excepting those moments of minor plot fail, it was pretty decent. The movie is fun, it has a good patriotic Indian feel to it, and it’s even generous toward losing Pakistan.

Well, that's all for now. Today, chak de India! Beat Pakistan and go on to the finals!

EDIT: Yay, India! Shabash! Now on to beat Sri Lanka for the title!
Posted by The Mighty Mango at 12:18 AM