NEW: Krrish 3: the movie that will not die

Synopsis: Now-married and domesticated superhero Krishna/Krrish (Hrithik Roshan) gets a supervillain: Kaal (Vivek Oberoi), a paraplegic telekinetic who is obsessed with finding bone marrow to fix his paralysis and thus fuses his odd DNA with animal DNA to create mutant humans. The mutants don’t help his marrow problem, but they do help him in his evil quest to rule the world by creating viruses and the providing an antidote based on that same wacky DNA.

This post should start with the disclosure that I haven’t — sadly — seen Koi Mil Gaya or Krrish. I have some idea of what happens in both and had every intention of watching both (especially Koi Mil Gaya, given my affinity for aliens and science fiction) before Krrish 3’s release, but, well, it didn’t happen.

So I was able to come in this with a fresh set of eyes that turned out to be mostly skeptical.

Okay, Krrish is a pretty cool all-purpose superhero. I will give him that.

But Krrish 3 mostly turns out to be the kind of overloaded superhero movie that makes you cringe at the plethora of superhero types.
(Some spoilers below.)

There is freaky science (Rohit opens the film harnessing light’s ability to bring things back to life; okay) and superhero domestic struggles (Krishna can’t keep a job because he has to disappear to be Krrish) and the usual suspension of disbelief that no one realizes handsome green-eyed Krishna is Krrish even after realizing a connection to Rohit Mehra.... and more freaky science (gene splicing animals and Kaal’s DNA onto other people to make manimals, including a tongue-flicking lizard-man…okaaay) and superhero’s non-super love interest being imperiled (yawn) and the lead female antagonist falling in love with the superhero as all women must and more freaky science (Kaal is somehow Rohit’s cloned but handicapped kid who looks nothing like him… okaaaaaaaayyy) and special effects that add a bit of cheese.

Not to mention, of course, that the music is lame at best and atrocious at worst. Although I will say the picturizations are not so bad as the songs themselves, and the choreography is fun. As usual, Hrithik Roshan’s dance moves are as super and logic-defying as Krrish.

While on the subject of the man himself, let me say Hrithik’s acting is amazingly versatile, but it’d be nice if he didn’t just tremble and get teary eyed in every anger-sorrow scene. Which, by the way, there are too many of. I think this particular superhero could do with a little less righteous indignation.

But, of course, Hrithik is a beautiful superhero (hey, I even think he could play Superman) and undoubtedly the strongest performer of this lot.

All Priyanka Chopra (playing Krishna’s wife, Priya) does all movie is run around gasping in horror and dancing. And being the least-pregnant pregnant person in the history of the universe. Emotion? From this one? Keep dreaming. (It’s worth noting that I really don’t hate Priyanka. She was amazing in Barfi. What I hate is lazy, I’m-just-here-to-look-pretty Priyanka.)

Kangna Ranaut is markedly better, although one tires of her — and the backless leather outfit — after a time. (Although on the subject of her outfits, she pulls off the high-end artsy looks very well.) 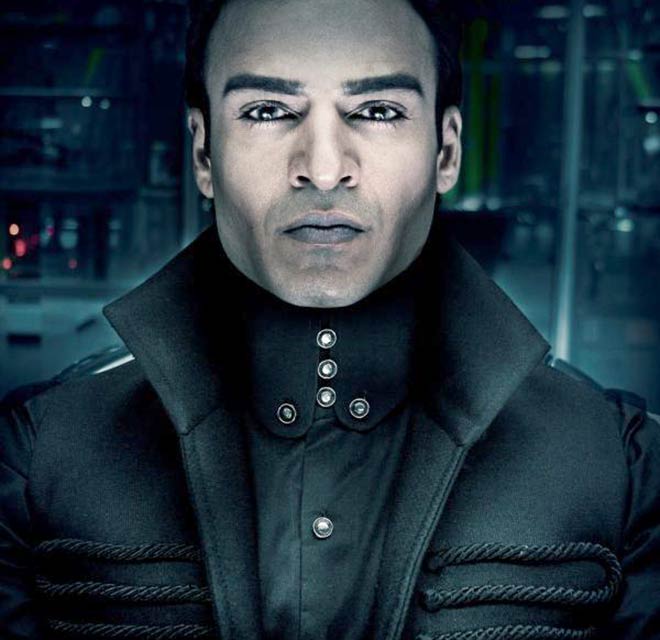 And Vivek Oberoi (when was the last time I saw him in a movie? I can’t even remember) floats around looking like an emaciated vampire and talking like he’s got a sore throat. Because we all know that’s what supervillains do, right? Once he sucks the bone marrow out of his newfound father in a decidedly weird way and magically becomes able to walk again, he becomes not just an annoying and mind-bogglingly boring supervillain despite his wackiness but a rather nonsensical one too.

But then again, I hate about 90 percent of Krrish 3’s climactic battle. (Spoilers.)

The nonsensicalness of Kaal’s decision to make himself a metal suit out of scraps from his lair to fight Krrish? Laughable. (Also, the only purpose it serves is to get him stuck to a magnet later on for a little while.)

Then we have to watch Krrish/Krishna get resurrected by Rohit’s crazy light scheme in a slow, drawn out father and son bit that kind of takes away from the climax’s pace. Okay, that’s not too bad. We should’ve seen that coming from the outset when Rohit was experimenting with the resurrecting powers of light. And that he would sacrifice himself after being marrow-robbed by Kaal, even though I fail to see how he can work as filter to those burning light rays.

But then unfortunately after some more banging around, we have to watch the whole light ray thing happen again.

And then the same thing destroys Kaal in the end. Once was enough, thanks. Also, the number of times everyone dies in the end before actually dying or living is very frustrating in addition to just plain poor.

Oh, and of course after all the other atrocities that the climactic fight commits, it goes all Michael Bay (if you don’t get the reference… Transformers) at the end, ripping up buildings all over Mumbai.

Really, I didn’t hate Krrish 3. It’s okay. But it’s not on par with the hype in several annoying ways, and it’s not what you’d hope for from a Diwali release.
Posted by The Mighty Mango at 12:06 AM