The enduring power of DDLJ, 17 years on 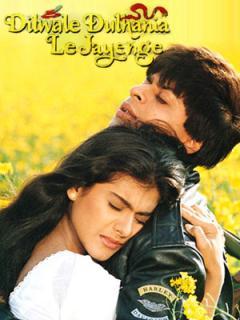 It’s true that DDLJ perhaps gave birth to a new generation of Bollywood film — a film by the next generation of Chopra, with tenets of the classic Yash Chopra style — but so, in ways, did the youth and boldness of Rangeela (in the same year), Amitabh Bachchan’s angry young man films of the 1970s, Bobby in 1973 as a story of young love, countless other films. Yet they haven’t had the theater run that DDLJ has.

Some have said to understand DDLJ’s power, one has to understand the India of 1995, the power of globalization and the way that Raj’s international style and desi heart spoke to a generation and a growing diaspora. The way that DDLJ became, as Vijay Mishra says in his book Bollywood Cinema, the first film to directly address the NRI population — the thousands who are far from India yet still Indian at heart.

And though those factors are certainly a part of understanding DDLJ, I think looking at just that misses the fact that DDLJ is fundamentally appealing in many ways. The first time I watched DDLJ, I had barely stepped into the Bollywood world, and all of the globalization/diaspora mumbo jumbo wasn’t even on my radar. But I loved DDLJ.

DDLJ, I think, appeals to the romantic in all of us. It has the Swiss Alps backdrop, an obstacle in the heroine’s disapproving family, boy-girl antagonism that becomes love, dramatic train scenes — pretty classic characteristics of the Bollywood romance. Add on top of that a bewitchingly wonderful soundtrack of catchy and beautiful romantic tunes, some of 90s filmi music at its best. And the checklist of Bollywood blockbuster must-haves is not only complete: It’s filled out in style.

There is something to be said, too, for the remarkable chemistry of SRK and Kajol (not to mention the knockout supporting cast). Perhaps I’m slightly biased on this point because SRK and Kajol are two of my favorite actors, but there’s a certain sizzle there that you really can’t deny. DDLJ launched the lover boy persona that SRK has mastered and been unable to fully escape for nearly two decades. I’m always talking about how SRK has a charm that’s undefinable and powerful, but I think the particular appeal of Raj as a character has to do with more than SRK.

Most centrally, DDLJ features a young man who is a troublemaker — he fails his exams, parties constantly, is never serious, puts the moves on any girl in his path and steals beer from gas stations. But once he falls in love with a girl, we discover that he is, beneath the whole bad boy act, honor-bound and big-hearted — dilwale. He wants to marry Simran — though he's never loved a girl before — and not just that, but win her the right way because he is so upstanding. Isn’t that most women’s romantic fantasy about bad boys? That beneath it all, they’re good at heart?

And Simran may cower in fear of her father, but that doesn’t mean she’s weak. She’s stubborn and forceful with Raj from the moment they meet. A firecracker hidden in a somewhat demure package. A woman who respects her family and tradition but also has a spark and a temper — isn’t that what many men wish for?

Let’s not forget the way that the love unfolds: unexpectedly, right in the face of Simran’s impending marriage. Simran had, as she tells her mother, resolved to be happy for one month and consigned herself thereafter to an unhappy life in a foreign country with a man she’d never met. And then Raj sweeps into her life. And Raj is a freewheeling lover who treats Simran like he would any other girl — i.e. flirting incessantly but never seriously — before Simran’s nature and good heart unexpectedly draw him in deeper. (“I’ve had many affairs,” he tells her, “but I’ve never been in love.”)

And then the lovers embark on a quest to win over Simran’s family — effectively winning over an audience in the process — while also meeting behind closed doors as, well, two people in love. (And while wooing Simran’s family, Raj — in true SRK fashion — is particularly adept at wooing the women, of course.) It’s both a public and private love affair, with all of the thrill of a clandestine love affair and all of the jokes and smiles involved in gaining acceptance and approval from a family. A love so honorable it refuses to elope but not so honorable that it won't lie to win approval.

And let it never be said that the Chopras don’t have a mastery of the small romantic gestures as well as the large that will make your heart melt. From Raj convincing Simran they’ve slept together only to tell her he’s certainly joking because he respects her honor to trying to sneak a kiss behind a pillar — only to have Babuji interrupt — to confessing love in a field of yellow flowers after Raj has flown halfway around the world for Simran. Whole lists are dedicated to the top romantic moments in DDLJ.

DDLJ is fundamentally a story of loving, desi hearts found in unlikely places. A big, honest heart with desi values is found in freewheeling, partying spoiled London boy Raj. Simran finds the balance in her heart to love Raj and still respect and honor her family. Simran’s Babuji leaves London and seeks comfort in Punjab because he believes Londoners are all heartless and unfamiliar and that many second-generation desis like Raj “dishonor the name of Hindustan.” When he meets Raj’s Pops in Punjab, he says his London clothes belie his desi persona, to which Pops responds, “Clothes? I keep Hindustan in my heart.” That’s the sentiment that speaks to the diaspora, what I was talking about before.

But more, I think, than finding desi values, DDLJ is about finding good people and goodness in the hearts of everyone. Because there’s Raj and Simran’s initial antagonism that turns to love (well, maybe the antagonism is only Simran’s) because both unexpectedly find good hearts in the other. And then despite the antagonism between Simran’s father and Raj, Raj is able to ask for forgiveness and ultimately (in the last, y’know, minute of the film) Simran’s father is able to forgive his grievances with Raj and let Simran go to him because he recognizes that “no one can love you as he does.”

That is why I say DDLJ appeals to the romantic, the optimist, in all of us and not just the desi diaspora.

It’s one of the several powerful factors that contributes to make DDLJ an enduring masterpiece that other films will continue to chase.

Posted by The Mighty Mango at 1:37 AM