Farewell, Yash Chopra. Thank you, for your effect on me and for Bollywood 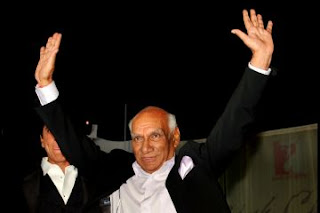 That view has shaped the way that India treats cinema, making a film-going in itself an event. How much are we beholden to a Bollywood shaped by Yash Chopra’s big dreams and grandeur?

On Sunday morning in the U.S., I sat in a theater watching the influence of Yash Chopra — particularly strong in Karan Johar — unfold onscreen: unbridled (even melodramatic) emotion, a romantic song with scenes in snowcapped mountains (though perhaps not Yashji’s Swiss Alps), the complex relationships of human beings taking center stage. (No, Karan Johar is no Yash Chopra — no one is — but he’s one of the many who owes Yashji a debt for his effect on Bollywood as a whole.)

I have been around Bollywood for a relatively short while, so I cannot wax poetic about the nostalgia Yash Chopra films invoke. I can, however, tell you that many of his films remain my favorites, from his directorial excellence to the countless films he’s lent a guiding hand to as producer.

Yashji was never afraid to make big films and make films big, something that I think has come to define Bollywood cinema as it strives to meet his mark. Yash Chopra’s penchant for excellence and grandeur raised the bar. His touch was exquisite and instantly recognizable, the master of stunning visuals, extravagance, expression and emotion.

His films have “had some of the most beautiful lyrics ever written in Hindi cinema,” says the Times of India’s obituary. And Yashji knew how to do them justice, once saying, “I think songs enhance romance and sometimes, even drama... Songs are a great way of conveying the director's imagination.” He was a filmmaker who knew how to take the poetic words and make them visual.

And most of all, he was the master, or rather the king, of romance. Last week on DDLJ’s anniversary, I wrote, “let it never be said that the Chopras don’t have a mastery of the small romantic gestures as well as the large that will make your heart melt.” I think we’ve all had our hearts melted a dozen times over thanks to Yashji.

I don’t think it’s a stretch at all to say that Yash Chopra taught me about love, emotion, dreaming big and always having optimism. Those exact things were things I mentioned this summer when writing about why I love Bollywood. In Yash Chopra’s Bollywood, love really does conquer all (generation gaps, 22 years of separation, death, whole lives). He said it himself bluntly: “What is the point of making the film if the man doesn't marry the girl?”

Thank you, Yashji, for your art, your optimism and your dedication to telling stories of human relationships. Thank you for teaching me — and us — about love, emotions and big dreams. You will be missed.
Posted by The Mighty Mango at 11:50 PM