Madrasapattinam (2010): Branching out to Kollywood!

So yesterday I finally FINALLY after two weeks of searching found a store in Manhattan that sells Bollywood DVDs. I swear I've searched every Indian store within 20 blocks looking for one, figuring around here it'd be like at home where the Indian bazaars sell mostly groceries but with saris, music and DVDs on the side. Apparently here Indian-Pakistani groceries sell... food. That's it.

But now that I've found my DVD store (Music of India at 28th and Lex), it's all good. I bought films I'd never heard of: 36 China Town, Chamatkar and Oh Darling! Yeh Hai India. I also bought Ajab Prem Ki Ghazab Kahani, which we've seen (Kiwi owns it). So! Those have been added to the collection.

But onward with more backlogged reviewing!

Madrasapattinam (2010): (Which it took me FOREVER to learn to spell AND pronounce) 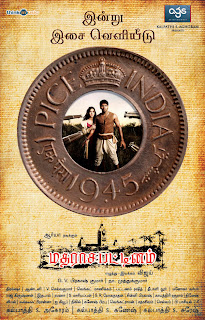 Look, Kollywood! Time to break out of the Bollywood bubble. It’s our (well, really my; the others have yet to watch it) first South Indian and non-Hindi flick! And to be perfectly honest, Tamil sounds so funny to my ears. But does anyone have any recs for other good Tamil films? I'm interested to see the differences.

Synopsis: After the death of her husband, elderly and sickly Englishwoman Amy Wilkinson vows to return to Madras (now Chennai), where she spent her youth, much to the chagrin of her daughter and granddaughter Catherine, who accompanies her. She gives no reasons for it but embarks on a quest to find a man named Parithi who she knew some 60 years before. Through her memory, we learn the story of how young Amy (Amy Jackson), daughter of the British Madras governor, fell in love with Parithi (Arya), a man of the dhobi launderer class, but that they were forced apart when India’s independence forced Amy’s family to leave the country. In the present time, the elder Amy now seeks Parithi out to return the thali necklace (equivalent of a wedding ring) he gave to her before they were parted as a sign that no one could take her from India or from him.

I searched for this film high and low (as in really, you have no idea of the hours spent looking for it) after seeing someone talk about it on LiveJournal, only to find out after all of my blood, sweat and tears that it was… on YouTube. With subtitles. Well, there’s hours of my life I’ll never get back, but now I know better than to not check YouTube first.

First off, let me say I pretty much loved this film, which I almost knew I would. I love period pieces in any language, and I’ve often found myself wanting more period pieces set in colonial British India or newly independent India (maybe this is also just because I’m fascinated with British colonial literature, especially colonial India; I have a particularly unnatural attachment to Kipling). I don’t know that I’ve found many of them – Lagaan and Jodhaa Akbar (both of which I LOVED) and more modernly Devdas and Water. So this… definitely a happy find. (And any recommendations for period pieces would be much appreciated.)

Everything about the 1940s Madras setting was simply beautiful. Costumes (even though some of the formalwear was not 40s British appropriate), locations, politics…

The performances from the two leads, also wonderful. The attraction between Arya and Amy Jackson – both of whom are quite easy on the eyes – definitely sizzles from the beginning and continues even when the film feels like it could have done more to show their falling in love. I’m also quite impressed because Amy Jackson is, I found out, my age (20). Also I couldn’t tell for sure if she was dubbed by someone else (because I know that’s general practice for nonspeakers in Hindi film), but I thought she learned her own Tamil lines and she sounded great. However, the English dialogues of just about everybody in this film had awkward inflections to them that made them feel not quite right.

The love story itself was also quite powerful, emerging between the two least likely people to fall in love, and being such a huge impact on the lives of the two involved that Amy comes back to search for her Parithi 60 years later.

And while I spent about 30 to 45 minutes lamenting that Amy, who was brave enough to sneak out and meet Parithi and also to defy her parents, turns into a bit of a wallflower while Parithi struggles with Robert (Amy's would-be suitor and the violent chief of police), her strength comes through in the end. She works up the courage and the smarts to escape her mother's attempt to drag her to Delhi, physically attacks Robert when she fears for Parithi and, ultimately, works up the emotional strength to push an injured Parithi into the river to save him and surrender herself when it looks like they'll be captured.

Amy is the powerful protagonist of this film.

That being said, the film isn’t perfect. I had problems with its rhythm. In the early sections, the film has the most ridiculously sharp, low-budget-style transitions. I thought the film was excellent quality in the sets, filters and camera-work – all above and beyond what I was expecting. But the blatant lack of transitions (and/or lingering shots in some places) was distracting and cheapened things for me.

The villain, Amy’s would-be fiancé Robert Ellis (Alexx ONell), is also pretty paper-thin as far as a villain goes. He’s the stereotypical ruthless British colonizer/evil, possessive attempted-suitor. I suppose you could roughly compare him to Andrew Russell, the jealous Indian-hating officer villain in Lagaan, and Andrew comes out on top – equally as vicious with twice the character depth.

The story doesn’t do much to explain what happens to Amy once she leaves Madras and goes back to England. We obviously know that she gets married and has a daughter. How did her marriage come about? Did she think of Parithi? What’s her daughter’s name? Does her daughter not know anything at all about her mother’s time in India? I kind of wanted these questions answered but got nothing.

**Spoilers about the ending** And the ending… Really sad. The modern half of the story is very much reminiscent of the American film Letters to Juliet (perhaps it’s “inspired” by that) but with the much more dramatic ending. Basically it invalidates most of the struggle through the film, too, because Amy struggles for their love in the 40s only to be dragged away in 1947 after independence and then goes through everything in the modern period searching for Parithi as her health fails her only to find out he died 12 years before. (And on top of that, we don’t really know how he dies.) The only way that Amy and Parithi get to be together is when she DIES on his grave. Kind of a downer. The whole film kind of made me hope that for all that they went through, Parithi and Amy would at least be reunited briefly in old age. Not so.

Overall, definitely one I’d recommend watching, and I’m looking forward to seeing more films with either Amy Jackson or Arya. :)
Posted by The Mighty Mango at 12:08 AM