As you may have noticed, we're not only messing around with the layout but also clearing a backlog of posts. We watched a lot of films in a short amount of time and then got really busy, me especially with moving stuff up to New York, and didn't post about the films that we watched.

So still likely to come up soon for reviews/posts are Ajab Prem Ki Ghazab Kahani (Papaya has been working on it for two months now...), 3 Idiots (now one of my fave films!), Break Ke Baad, Kaho Naa... Pyaar Hai, Mere Baap Pehle Aap, Dil Chahta Hai and Bunty Aur Babli. There's probably more than that, but those are the ones I can think of right away. 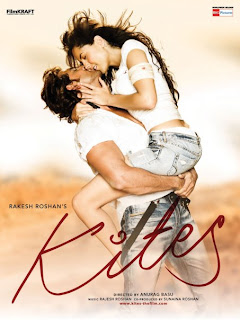 Jay (Hrithik Roshan) is a dance teacher in Las Vegas who also chases money – including gambling and marrying immigrant women to get them green cards in exchange for cash. When Gina, the daughter of a rich casino owner falls for him, Jay goes along with it to marry into money. Later he finds out that the family dabbles in illegal activities as well, and then that Gina’s violent, ruthless brother Tony (Nicholas Brown) is engaged to Mexican bombshell “Natasha,” better known as Linda (Barbara Mori), the last immigrant that Jay married. Entranced, Jay draws her out for a night to discuss their “divorce” (which only halfway makes sense, just FYI), but the romantic night turns into a run for their lives and the Mexico border when Tony arrives.

Like Aisha, this is one we waited for a long time. Much longer, in fact. We cursed Netflix repeatedly for months until FINALLY they got the DVD. So, pardon much rambling because due to the nature of the film, there must be… much rambling.

Obviously, as you can tell by the fact that we have this blog, the things we talk about on this blog and the amount of Indian film we consume, we (like most of you, I'd hope) have a minor obsession with Indian culture and/or all things Indian. Well, truth be told, we also have a (possibly larger) obsession with Mexico and all things Mexican. We all speak varying degrees of Spanish, eat Mexican food like it's manna from heaven, are planning a cruise to Cozumel if and when funds arise, and have Mexico T-shirts from the FIFA World Cup. Yes, we are possibly a little psychotic, but the takeaway message is WE LOVE MEXICANS.

So basically when we found out that Kites is in Hindi and Spanish and set partially in Mexico, well, we were rather excited. I believe my literal reaction was captured by Papaya in tweet: "lexiburpsalot (talking about #Kites) @nercabeyul: "It happens in MEXICO?!" *flails* (yes, she literally flailed) "WE HAVE TO SEE IT!!"" Heh.

The fact that you get to see Hrithik in traditional Mexican garb COMPLETE WITH SOMBRERO may make the entire thing worth watching anyway. ;)

In many ways, Kites lived up to my expectations. It was beautifully shot. The majority of the film was overall beautifully crafted. It’s sexy (very sexy) and much more fast-paced and action-packed than I expected. The name “Kites” is kind of deceptively mellow – the film has one quote in the beginning about kites, but basically it has nothing at all to do with kites.

Hrithik Roshan is a gem. The man can woo and be sexy (he was looking especially fine in this film, if I may say so) and do comedy and shoot people. And even more than that, the man can dance. As in my mind can sometimes not even comprehend the ways in which he can move. I wish we'd actually gotten more of him dancing.

There seemed to be a lot of complaints in reviews about Barbara Mori and her acting. I really didn’t see it. She was kind of smiley to the point of being annoying, but I think she played her role very well. In later scenes when she had to grapple with some very serious emotion, she pulled it off convincingly and movingly. She and Hrithik also had fantastic chemistry, as I'm sure you can see from the photos lacing this post.

The casting of the bad guy, though – Tony, Linda's finacé/Jay's potential brother-in-law, played by Nicholas Brown – bothered me. His voice just felt strained the entire time he spoke English (and half of the time when he spoke Hindi), and considering the actor is Australian, I think it's an attempt to have the correct accent that just... didn't turn out well. On top of the thinness of Tony as a villain, it was just annoying.

And while we’re speaking of speaking, let’s talk language. The blending of languages is a habit of mine (or ours... among ourselves, we speak our own hybrid blend of about four languages), and having a film in Spanish and Hindi was just flat-out awesome.  (Also, I now wonder... would a Bollywood blog in Spanish go over well? Hmmm...)

My poor brain likes to confuse languages though, so that was fun. I once watched a chunk of Lagaan with Spanish subtitles right before going to sleep, and I woke up SO CONFUSED with my brain counting, "Ek, do, tres, cuatro..." This was less confusing than that, but my poor brain still struggled a little to separate as either Spanish or Hindi what I was hearing and comprehending. That being said, I had my doubts about the number of people in this film who spoke both. One of the central cruxes of the film is that Jay and Linda fall in love with one another even though they don't speak a common language (except a smattering of English that Linda can pick out). But never fear, for there are about five different people who pop up in this film with fluency in both Spanish and Hindi to translate between the two. 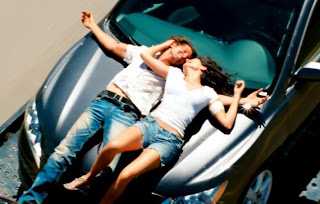 At the same time, as much as I love the idea, I'm kind of skeptical of a love that develops between two people who can't even speak the same language. I know so many films in Bollywood hinge on the idea of love that develops rapidly and even nonsensically, and I accept that on almost every occasion. It's part of the aesthetic, and on some level we all want to believe in lasting love that forms almost immediately between two people, regardless of circumstance. But yes, honestly I'm a little bit bothered by this one. How fully can you understand a person, much less love him or her, when you can't... well... understand him or her?

And another language nitpick I have, even though it is, well, nitpicky: Linda's able to send Jay a text message in perfect English, despite a relatively firm establishment in the film that she can only speak broken English. In my personal experience, even my Mexican friends that have been in the U.S. for four years (much longer than Linda) and learned to speak English relatively well can't text in grammatically correct English.

The film is also somewhat confusingly told in a series of flashbacks, but that's probably an intentional attempt to throw you off balance, especially with the ending, which, though I won't go into detail, is a truly painful downer and both evocative and somewhat silly at the same time. I understand it somewhat on an intellectual level, but it still feels like a degree of escapism to me.

I was pleasantly surprised at the quality of the action in this film. I'm sure we all know the painfulness that is poor-quality action scenes – from muggings and fistfights to wars – in Hindi films. There weren't any awkward punching scenes or blatant ridiculousness going on. Which, you know, is a good thing since most of the film has action.
I can never tell how I feel about the "running-away-from-the-bad-guys" plot line. I tend to roll my eyes at the plots because they usually get a little stale after a while (frantic running, near-capture, being shot at, time of peace, repeat – *yawn*), but at the same time, I did just write an entire novel that has the characters running away for the entire book. lol. It's an easy way to keep throwing out constant moments of suspense. So sometimes I get tired of it, sometimes I’m OK. In the end, I don’t know which sometimes rules more.

Ultimately, Kites is one that I loved enough that it’s now on my to-buy list, and I definitely plan on rewatching it again in the near future, even if I don’t watch it all the way to the, well, conclusion.
Posted by The Mighty Mango at 1:09 AM