It’s one we’ve all been waiting for… Ek Tha Tiger! Beware of spoilers below, though I tried to avoid the big ones!

Synopsis: Tiger (Salman Khan) is a ruthless RAW agent known for getting things done — and killing people (“Try not to kill anyone on this one,” his boss asks). Sent on a mission to observe an Indian scientist in Ireland, Tiger rediscovers his humanity as he falls in love with the scientist’s housekeeper, Zoya (Katrina Kaif). But as fate would have it, Zoya is actually an undercover Pakistani spy, the very last person Tiger should fall in love with.

So let’s just say I liked it despite my ongoing Sallu issues. I really enjoyed it, as a matter of fact, even though it wasn’t my favorite.

Ek Tha Tiger is roughly comparable to Agent Vinod in several ways. It’s a spy flick based on a character who’s ostensibly RAW’s star agent, who then falls for a Pakistani woman. (Though there’s a key difference in this that I’ll discuss in a moment.) I tweeted after seeing the movie that in a way, Ek Tha Tiger feels like Salman’s response to the hailed-as-a-first-Bond-style-Bwood-spy-flick Agent Vinod: “Saif can be a desi spy? I can be a more badass desi James Bond!” (“Main James Bond hoon!” he actually yells in one scene.) I’ll skirt going into which one I liked more because there’s really a key difference in the two: Agent Vinod is a spy movie with a conspiracy-style plot and a Bollywood heart; Ek Tha Tiger is a Bollywood love story with a spy setting.

Another important (though less directional) difference is in each film’s treatment of Pakistan. Each film was banned in Pakistan, but after Sallu essentially campaigned for Ek Tha Tiger in Pakistan, the ban was lifted. But aside from that, it makes a lot of sense that of the two, Ek Tha Tiger was the one unbanned: Though it deals with the touchy subject of Indo-Pak relations, it’s really so evenhanded in its treatment that I have to wonder why it was banned at all. (Well, it’s because the Pakistani government is overly touchy; but that’s an argument for another day…) “I won’t betray my country,” Zoya says. “And I won’t betray mine,” Tiger responds. It’s an important difference because in Agent Vinod, Iram effectively betrays Pakistan, and Pakistan is behind nearly every nefarious dealing in the film. Ek Tha Tiger merely shows two countries senselessly at war, senselessly hating one another, neither more to blame than the other. “Our countries will keep fighting for who knows how long,” Zoya says. So she and Tiger agree not to play into their countries’ fighting — signaling romance winning over criticizing Pakistan.

Taking steps away from that, here are some comments more on the film itself:

The cinematography is really quite better than I actually anticipated. From excellent filter work to great moments that slow down action scenes to creative shots, the camera work was really quite top knotch.

And the action is, save its handful of groaningly exaggerated moments, actually quite good. From the standard chase-shooting scenes to a great across-the-rooftops segment in Cuba, they’re varied and well-done.

The one major exception? For a well-trained and supposedly valuable Pakistani spy, Zoya shows very little hand-to-hand prowess or even spy smarts until about ¾ of the way through the film. Instead, she’s usually prey to what I call film’s “helpless woman syndrome”...despite, yeah, HELLO, being a spy. It’s one of the things that makes me angriest about films. Why must a woman be helpless on screen when every bit of the film shows the man’s physical prowess?

Another random note about Zoya is that once she's made to look more "Pakistani," Katrina looks decidedly out of place in more traditional desi garb. Very awkward almost. And folks have come out of the woodwork to argue this with me, but I think Katrina also looks awkward and ridiculous in a scene where she carries bagpipes (which, by the way, are Scottish-style bagpipes and not Irish-style bagpipes). I say not even she can make bagpipes (not the outfit, but the bagpipes themselves) sexy, but evidently everyone disagrees. 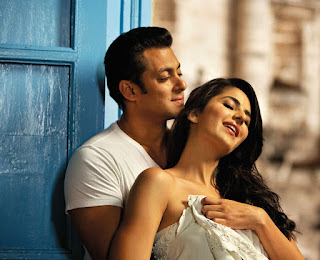 Anyway, despite having definitely gone through a breakup, Salman and Katrina still have some definite chemistry on screen. An almost-kiss moment has your heart stopping for just a moment (in part because you actually think, “Wait, an onscreen kiss...between them?”), and then later, there’s a heavily romantic scene where she basically seduces him away from painting. And it’s great. (Totally irrelevant sidenote, but Katrina is definitely taller than Salman, but movie magic keeps trying to make him taller... Short Man Syndrome!)

The film has a fabulous international feel to it. From India to Dublin to Istanbul to Havana — with a certain small tribute to each locale along the way. And perhaps I’m biased because Dublin and Havana are high on my “wish I could travel there” lists, but I liked this far more than many globe-hopping films (and far more than Agent Vinod’s flavorless stream of locales). 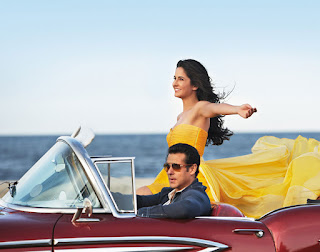 I particularly loved the stint in Havana, with its carefree feel, Spanish (me encanta!) and the classic cars (que bella!). I could rave forever about the cars, but I won’t.

I could also rave about how wonderful the tense moments, the cliffhangers that keep you guessing, are. But I’ll restrain myself because I really don’t want to spoil anything for anybody. (Feel free to discuss them in comments, though!) But especially the interval cliffhanger! Wow.