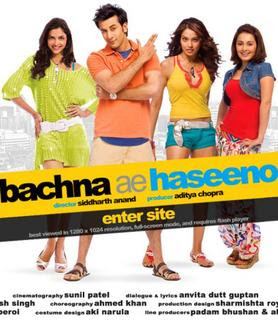 Essentially, this film is a three-part look at different love stories in the life of one guy, Raj Sharma (Ranbir Kapoor), who goes from using and completely wronging the first two to getting wronged by the third and trying to turn himself around at that point. First, you have Mahi (Minissha Lamba), an idealistic Punjabi girl; then Radhika (later Shreya) (Bipasha Basu), a model in Mumbai; and finally Gayatri (Deepika Padukone), an Indian student in Australia.

And trust me, there’s a lot to forgive, because he does some really, really terrible things.

In the first storyline, Raj meets Mahi, an idealistic young girl obsessed with DDLJ, on a Eurorail train. From there on, Raj basically apes DDLJ to get with Mahi. As someone who thoroughly adores SRK, I love watching other people imitate his roles, especially Raj from DDLJ (although watching people do Rahul from K2H2 is also a fave), and I’m thinking of even dedicating a whole gallery to these imitations.

Ranbir doing Raj is hilarious awesomeness. (It’s also funny to me on another level because Ranbir’s nose reminds me of SRK’s.) But even though it’s hilarious awesomeness, he’s doing it for jerkish reasons, and you can’t help but feel bad for the girl – because who could resist Ranbir Kapoor as Raj?

But just wait, it gets worse. Then Raj moves to Mumbai, where he meets Radhika, an aspiring model, who subsequently becomes his live-in girlfriend for something crazy like three years. Then Raj gets a job offer to go to Australia, which he thinks will put an immediate stop to the relationship. To his surprise (and mine), Radhika immediately starts making plans for their wedding so that she can go with him, including setting up a small ceremony at the courthouse. It seems a little contrived to me that after three years as a live-in girlfriend who’s never mentioned marriage, Radhika decides they have to get married just because they’re moving. But then again, maybe that’s just me.

After trying to indirectly weasel his way out of the wedding in a hundred different ways, Raj ends up deserting Radhika without a word and going straight to the airport. I think the scene of her sitting on the courthouse steps in her wedding dress and mehndi while the rain pours down on her… One of the saddest things I’ve ever seen. (Not necessarily in the cripplingly depressing way that Devdas is, but in the “oh, God, that’s so horrible, I would freaking kill that dude!” kind of way.)

I can’t say I’m much of a fan of Bipasha in this film, but that scene was completely brilliant. If a character I haven’t particularly cared for during most of her part in the film can bring me to tears in one scene… You know it’s brilliant.

And that scene made me want to KILL Raj, as said before.

That’s probably why once he gets to Australia and actually falls in love with hard-working Indian student Gayatri only to propose and be completely shot down… You feel a sense of satisfaction because Raj has finally gotten what he deserves. It also helps that it comes from a woman who knows what she wants – a career, not to be tied down, so on – and is turning him down for personal nondouchey reasons.

And yet you can’t help but feel bad for Raj because, well, he has actually fallen in love for the first time (albeit kind of dumbly since Gayatri told him not to) and, well, it’s Ranbir and you love him anyway. Up to this point, I think the film was great. You had great acting and got to watch a real pain in the you-know-what get his just desserts.

And then finally, Raj gets it and realizes what a douche he’s been to other people and how they feel. So he sets off on a quest back to India to make things right. Even that is great, in theory. The film had a pretty unique and valid premise in a changed man looking for redemption by trying to make old wrongs right in love.

In practice, the Mahi closure was the only one that worked for me. When Raj gets around to Radhika-turned-Shreya, now a famous supermodel, it really falls apart. For her “forgiveness,” she makes him work like a dog as her personal assistant, which he agrees too. Finally, after months with no break, she tells him how horrible she felt waiting for him to come and marry her and refuses to accept his apologies despite the months of slaving. THEN, after absolutely no previous hint of breakdown or giving in, she shows up at the airport to make up.

Forced much? It really didn’t work for me there.

After this downward slump, we get the epitome of cop-out endings. Raj returns to Australia to find that Gayatri has been writing him emotional letters apologizing pretty much every day since he’s been gone. So basically after being resolved not to get married and be tied down, Gayatri decides right after Raj leaves that she actually loves him and so goes to write a letter and stick it under his door every day? When did such a strong woman suddenly become so pathetic? So quickly? And yes, she was probably wrong to discard him out of hand, but since when was wanting her independence so wrong? I felt like the apologies were too one-sided when she really didn’t have that much to apologize for.

Basically, this movie starts out great and they give some great potential for strong female characters, then cop out at the end. Radhika/Shreya keeps a certain level of her power because as she tells Raj, she puts on Shreya’s (pardon my language but there really is no other term) bitchy diva, “I am in charge” attitude to keep people at a distance and keep from being hurt and even after she apologizes, the attitude is still there for the public at large. But at the same time, a woman who was resolute against forgiving the man who left her at the altar… melts. Too quickly. And Gayatri’s complete reversal is an utter cop-out. There is absolutely no other explanation. A woman intent on independence and her own goals suddenly decides, eh, Raj is more important. Ultimate, ultimate death blow to what could have been a fantastic character.

So if you can handle not finishing it (I know a lot of people can’t; sadly, Papaya and Kiwi are such people), I’d only watch this film up to intermission and make up your own ending from there.
Posted by The Mighty Mango at 1:50 AM