Kickin' it a little old school this time with our first full pre-1990s Hindi film. :)

In the Bollywood take on the classic Hollywood musical Seven Brides for Seven Brothers (1954), the seven Anand brothers, named in order for the days of the week, live in a large farmhouse and, devoid of human contact, grow up somewhat animally, led by oldest brother Ravi (Amitabh Bachchan, whose, side note, wax figure was recently hugged by certain persons :D). In town, Ravi falls in love with the nurse Indu (Hema Malini) and marries her, bringing her back to tame the wild mess that is his brothers – without telling Indu he has six brothers, of course. After the shock, Indu goes about civilizing them, and the remaining six brothers meet and fall for a group of six women, who are caring for Seema Singh, a cripple about to inherit a large sum of money on her 21st birthday. This subsequently gets the poor Anands mixed up in Seema’s uncle’s plan to kill her and take the inheritance for himself.

Well, first off, let me say that I came into this film with high expectations because Seven Brides for Seven Brothers is one of my favorite movies of all time, and I usually love to see how things get adapted and changed for a Hindi audience. I gave a happy shriek when I found out the two were combined into Satte Pe Satta.

Ultimately, I had mixed feelings about the adaptation. Some of it made sense to me; some of it didn’t.

For the most part, the plot of the first half and even a decent dose of the second is lifted straight out of Seven Brides without a lick of adaptation unless you count dialogue shifting languages. But of course, there are some changes.

A change for the better is the way that Ravi and Indu fall in love, as opposed to Adam Pontipee and Milly in the original: In Seven Brides, Adam goes to town to “get him a wife” because the farmhouse needs a little TLC from a woman. While grabbing lunch, he falls for Milly’s cooking and nerve (in the way that she deals with customers) and makes her a proposal that she takes right away to get away from everything. The degree of misogyny in this has always struck me, and in Satte Pe Satte, it’s somewhat rectified: Ravi falls in love with Indu after a case of mistaken identity leads to him receiving a tight slap to the face. Despite Ravi’s over-the-top attempts to win her over, Indu remains strong and aloof for a long time before falling for him.

A change that is maybe borderline is the addition of the Seema storyline, which is a wholly Bollywood addition. At times it feels like a valid addition, but at others it feels like an INSANE completely random greed/murder plot that has absolutely nothing to do with a woman’s attempt to civilize seven brutish and crude but dancing and singing brothers. I mean honestly, who the heck thought of putting a hitman in a musical?

Overall, I think I have mixed feelings about this one mostly because it introduces my least favorite plot device of all time: look-alikes. After meeting Ravi, Seema’s uncle Ranjit hires newly out-of-prison hitman Babu to kill Seema because Babu looks JUST like Ravi. Cue a switcheroo, of course.

For the most part, sticking to the working formula that is Seven Brides’ plotline is a mark in favor of Satte Pe Satta. But at the same time, the film perhaps goes out of its way to keep the brothers in costumes resembling the attire of the Pontipees. I can’t help but think that farmers in 1980s India weren't wearing the same clothing as redheaded 1850s Oregon farmers. 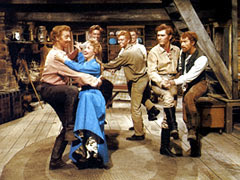 The film’s great omission comes at the end, when the only closure for the brothers having kidnapped seven women turns out to be, well, that they stand on a balcony watching Seema and Babu make up/unite. No families seem to have missed these women, nor do the boyfriends who feuded with the Anands over the girls earlier…

Overall, I enjoyed the film except for those WTH?! murder plot moments and the fact that despite being nearly 30 years after Seven Brides, many aspects are the same quality, and let’s just say I’m definitely looking forward to the remake that’s being launched with Madhuri Dixit and Sanjay Dutt. :)
Posted by The Mighty Mango at 10:43 PM